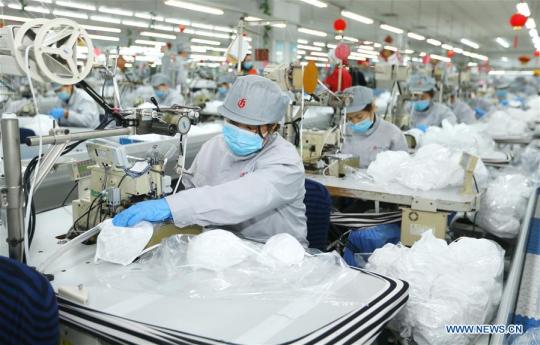 China has ramped up efforts to mobilize workers to meet the labor demands of companies as they resume production amid the ongoing novel coronavirus outbreak, including offering chartered transportation service to curb the spread of the epidemic during the return trips.

Song Xin, deputy director of employment promotion department of the Ministry of Human Resources and Social Security, said that in response to a lack of workers due to the outbreak, the ministry has set up a 24-hour work mechanism to mobilize the labor force to address enterprises' concerns.

"Dealing with the labor shortage is a top priority for human resources authorities at all levels," he said on Wednesday, adding that measures have been rolled out to meet companies' labor demands and to encourage local villagers to support affected enterprises.

Further, the ministry has set up more free online courses with the focus on professions in urgent demand and has given subsidies and allowances to companies and human-resources agencies to recruit workers as part of efforts to tackle the labor shortage, he said.

So far, the ministry has collaborated with labor forces in 22 provincial regions and sent about 103,000 workers to 2,600-plus short-staffed companies, according to Song.

He also noted that the ministry has been working closely with transport authorities to provide charter service in areas that are major sources of labor, including the provinces of Sichuan, Yunnan and Guizhou, in a bid to help a large number of migrant workers return safely and smoothly to their workplaces.

Feng Xiuquan, a migrant worker from Guangyuan city in Sichuan, said he was almost tearing his hair out over his inability to travel back to his workplace in Hangzhou, Zhejiang province, since the new virus flared up.

Staying at home for two more weeks than planned after the Spring Festival, the 43-year-old was craving an injection of cash. However, transportation restrictions and the fear of infection due to the ongoing epidemic prevented him from returning to the factory.

"The loss of weeks of income is a not a small thing to me and my family," he said, "But I can't bear the consequences of staying at hospitals for a rather long time if I get infected during my trip back to work."

His worries vanished when local human resources authorities and the transportation department arranged free chartered flights to help him and 153 other migrant workers return to their workplaces and took steps to curb the risk of infection during the trip.

In Guiyang, capital of Guizhou province, a local railway operator also arranged a train to carry nearly 300 migrant workers back to Hangzhou for work on Sunday.

More "point-to-point" direct trains for returning migrant workers will be opened to help workers from Sichuan, Chongqing and Guizhou return to areas including Beijing, Shanghai and Guangzhou after the Spring Festival, according to the China Railway Chengdu Group.