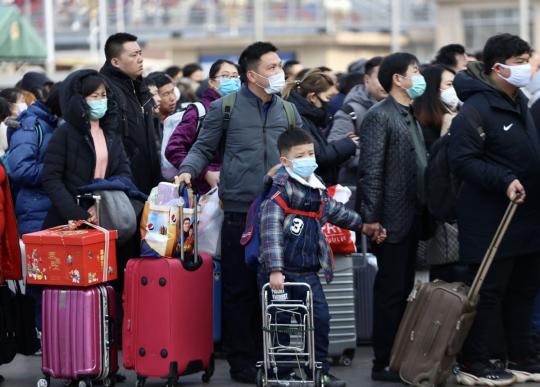 Yang Bohan has given up her plans to return to her hometown of Zhengzhou in Henan Province to celebrate the Spring Festival because of the ongoing pneumonia outbreak.

The 32-year-old designer, who works and lives in Beijing, hesitated to return home because it was difficult at first to buy a train ticket during the 40-day Spring Festival travel rush, known as chunyun.

"But after watching a rising number of pneumonia cases, I've decided not to go anywhere during the upcoming holiday, as there is a high risk of infection taking the train with my 3-year-old son," Yang said on Tuesday.

Instead, she asked the boy's grandparents to drive to Beijing from Zhengzhou for their family reunion.

Yang is not alone. A number of Chinese people who were ready to travel to spend the upcoming seven-day holiday with their families have changed their plans because of the new coronavirus spreading across the country.

A Beijing cartoonist who only gave her surname, Mao, said she got a partial refund for two round-trip flight tickets she had bought from Beijing to Chengdu, Sichuan province, on Monday night, but she had to pay a cancellation fee. She and her husband had made their travel plans a month ago.

In consideration of the changes people are making to their travel plans, many Chinese airlines since Tuesday have begun offering full refunds to passengers who have been prevented from flying in and out of Wuhan, Hubei Province, which is ground zero for the coronavirus.

The Civil Aviation Administration of China has paid a lot of attention to the virus and urged all airline companies to increase disease prevention to reduce the risk of infection for travelers and airline staff members. It also required airline companies on Tuesday to help refund tickets for free if passengers have applied to cancel flights to or from Wuhan.

Meanwhile, the China State Railway Group also said on Tuesday that it will help passengers who have booked train tickets for trips to and from Wuhan to get refunds. Normally, it charges a cancellation fee of 20 percent of the fare during the Spring Festival travel rush, but the group has waived the fees for passengers who submit cancellation requests by midnight of Friday.

Also since Tuesday, several popular Chinese travel-service providers, including Ctrip and Lvmama, are allowing people confirmed to have contracted the coronavirus, suspected cases and those who have been in contact with patients to cancel their booked flight or train tickets and accommodations for free.

Fees for such cancellations will be paid by those online travel agencies, and they said they will help passengers communicate with the national railway group and airlines to apply for ticket refunds and rescheduling.

Nearly 24.4 million train passengers are expected to either leave Wuhan or arrive in the city during the travel rush, which began on Jan 10 and will last until Feb 18, according to statistics released by the Wuhan railway authority.

The travel rush is the world's biggest annual human migration, with about 3 billion trips expected to be made around the country on all forms of transport.