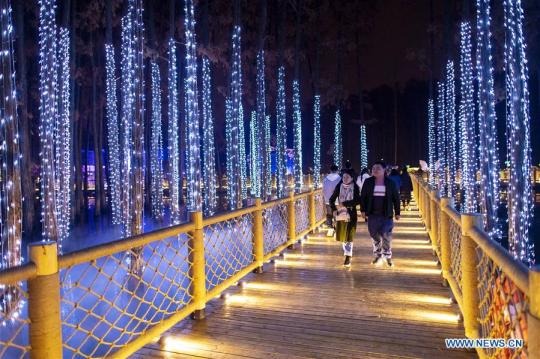 Wuhan in Central China's Hubei province will delay its annual travel event at the city's major tourism attractions for the upcoming Spring Festival amid the ongoing pneumonia outbreak, the city's culture and tourism bureau said on Tuesday.

The bureau did not specify how long the event will be delayed.

The bureau announced the event's launch on Sunday, which would have involved handing out 200,000 free tickets to Wuhan's 30 major tourist attractions starting Jan 25, the Spring Festival's New Year's Day on the traditional Chinese calendar, to Feb 8, the date of the Lantern Festival, which traditionally marks the end of the Chinese New Year celebration.

The attractions included one of the Four Great Towers of China, Yellow Crane Tower, and Wuhan Happy Valley, an amusement park popular with young people.

More than 33,000 people had signed up for tickets as of Monday at midnight and their spots will be reserved until the event restarts, the bureau said.

The city will reduce or cancel all unnecessary large gatherings to contain the spread of the pneumonia outbreak, the local Changjiang Daily reported on Tuesday.