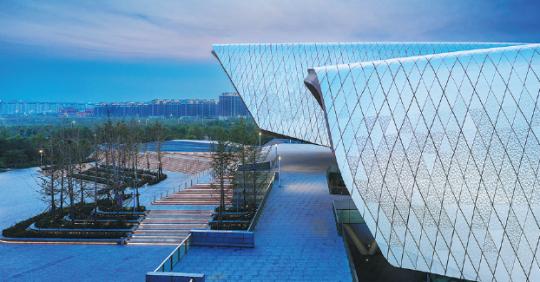 The National Maritime Museum of China is a modern complex designed by the Australian company Cox Architecture and the Tianjin Architecture Design Institute. (PHOTOS PROVIDED TO CHINA DAILY)

Just outside the northern port city of Tianjin sits the latest addition to China's cultural heritage.

The National Maritime Museum of China is an imposing modern complex designed by the Australian company Cox Architecture and the Tianjin Architecture Design Institute, or TADI.

The museum joins a growing list of innovative, modern architecture across China – from Beijing Daxing International Airport, to the country's focus on "green" design in urban development.

Since the museum's soft opening in May, thousands have flocked to an institution that will highlight China's maritime history. No date has been announced for the official opening.

Philip Cox, whose company won the international design competition for the project in 2012, said the elegant, simple layout of the museum, which sits on a manmade bay, features white exhibition halls stretching out like the fingers of a hand, resembling brush strokes in calligraphy.

Liu Jingliang, honorary president of TADI, the local design partner for the project, said, "The main aim of the museum is to enhance people's awareness of the sea.

"As President Xi Jinping said during the military parade to mark the 70th anniversary of the founding of the People's Liberation Army Navy, 'The blue planet humans inhabit is not divided into islands by the oceans, but is connected by the oceans to form a community with a shared future'."

Liu said that China now has its first such national museum "and we are very proud to have participated in this project".

He said the world-class building combines elements of history, culture and art.

Covering 80,000 square meters, the building's four halls stretch out over the harbor and converge onto a central area.

Each hall is devoted to a different aspects of the country's marine heritage: nature and oceans; world maritime civilization; marine culture; and historic vessels. There is a temporary exhibition hall and space for public education, business, research and curatorial facilities.

This arrangement of the halls and the maritime plaza ensured the museum does not resemble one huge building.

The architecture is informed by aquatic references, such as anemones, coral and vessels in port — subtle enticements to explore its exhibits.

The design leads visitors up a ramp to an elevated area from which they can access one of two split levels, allowing the collections and operations center to be located immediately under the main hall.

Liu said the design adopted "a nonlinear approach extending from the land to the sea, with the land and water interacting with each other".

"This will encourage people to explore and discover (the building) themselves. While some say the exterior looks like a shoal of fish jumping toward the surface of the sea, others think it is like a boat lying on the sea, or a hand reaching toward the sea. Some even say it depicts various creatures under the water."

Cox, the founder of Cox Architecture, said: "There are a lot of Australian architects working in China but very few have been given the privilege to do a building of such national importance as this one."

"I can't remember just how many companies competed for National Maritime Museum of China contract, but in the end it was down to five or six, including Chinese firms," Cox said.

"The authorities liked our design concept and selected us along with TADI as the local partners. It was a very good cooperative effort.

"Usually in a project like this, you often see some clashes, whether over the design concept or just personalities, but I can honestly say that was not the case for this project. Everything went better than any of us expected."

He said the brief — to submit a design for a museum reflecting China's maritime history — provided a great degree of flexibility.

"We wanted to know what ships and exhibits would be on display so that we could work on some concepts. We were told not to worry about that, as it would be sorted later."

Anya Meng, an associate at Cox Architecture who coordinated the project, said: "The exhibition halls sit within the landscape, offering views out to nature and its wider context as you navigate through the halls."

A "full immersive experience" is also provided in each exhibition hall, which houses exhibits with specific requirements. "Few museums offer an experience like that," Meng said.

The building can be interpreted as an "exhibition in the landscape", with the halls cantilevering majestically out over the water.

Cox added: "Even when building started, there was no water. The bay the museum is on was empty. Once the building was completed, the area around it was flooded.

"It's amazing when you think about it — so different to how European minds think."

"I hope that in time we can develop the museum as a center for marine cultural heritage preservation, marine cultural research and public education on marine knowledge," Zhu said.

"Throughout the long course of history, many of our ancestors living in coastal areas created a maritime civilization as they got to know and exploit the ocean," he said.

"With continuous advancement of shipbuilding techniques and seamanship, maritime communication between China and the rest of the world became more frequent. The creation of the Maritime Silk Road, in particular, led to the ancient Chinese maritime civilization."

Zhu said this civilization "carries the valuable cultural spirit and traditions of the Chinese nation" and has made an indelible contribution to the development of overall maritime civilization.

He said the emergence of such a civilization in China started in ancient times when people began to explore and use the sea.

People in the Stone Age, who formed into groups and settled by the sea, left many remains on islands and in coastal regions.

"These inhabitants had a different way of life from those in inland areas, as they were better adapted to the natural environment of the coast," Zhu said.

He cited two examples of the ocean's impact on people's lives: perforated shells found at the Peking Man Site at Zhoukoudian, near Beijing, which are 10,000 to 30,000 years old; and the making of canoes some 7,000 to 8,000 years ago in coastal areas of southeastern China.

He said the remains of ancient canoes found in Zhejiang province are believed to be some of the first built by humans. An adze, a tool used to build a canoe, also provided important evidence to study humans' early migration across the oceans.

Many advanced shipbuilding techniques that emerged in China during the Tang Dynasty (618-907) had a great impact on the global shipbuilding industry, Zhu said.

During the Han Dynasty (206 BC-AD 220), Chinese vessels were known to sail routes to present-day India and Sri Lanka, and between the Wei-Jin Period and the Tang Dynasty — from AD 220-907, boats from China sailed to the Korean Peninsula, Japan, South Asia and West Asia.

During the Tang Dynasty, there was also a route from Guangzhou, Guangdong province, to the Arabian Peninsula.

The Maritime Silk Road, which emerged during the Qin (221-206 BC) and Han dynasties, witnessed significant development in the Tang Dynasty. Many relics were found during this period, proving that maritime trade existed between China and other countries.

Zhu said, "Chinese maritime civilization witnessed prosperity during the Song to Yuan dynasties (960-1368), when development of the Maritime Silk Road reached its peak.

"In the 12th century, the compass started to be used in China for navigation. It was then introduced to Europe by the Arabs, and helped promote development of the shipping industry in the West."

From 1405 to 1433, the expeditionary voyages of maritime explorer Zheng He involved more than 200 vessels and 27,000 crew. He was in command for the biggest long-distance voyage ever undertaken in the world at the time.

"Zheng He's voyage to the west was the climax of ancient China's maritime civilization. It disseminated Chinese civilization to the rest of the world, enhanced cultural communication among different countries and regions, and promoted the prosperity of international trade," Zhu said.

Rejuvenation of the country's maritime tradition started after the founding of the People's Republic of China in 1949, Zhu said. In recent years, its marine industry has developed in "leaps and bounds", in areas such as investigation and observation, deep-sea exploration and polar research.

The legal system covering maritime issues has also been greatly improved, with the launch of a series of laws for deep sea, island, and marine environmental protection, which safeguard development of the marine industry.

Zhu said China's active participation in global maritime cooperation and management, and its contribution to protecting the marine environment have shown that it has taken on such responsibility as a major country.

"China is also working to promote construction of the 21st Century Maritime Silk Road, while promoting the concept of peaceful development and win-win cooperation across the world.

"With the theme of developing the blue economy, China encourages all-round and pragmatic cooperation (under the Belt and Road Initiative).

"Chinese marine civilization is on its way toward rejuvenation, which will be a positive driver for rejuvenation of the nation."