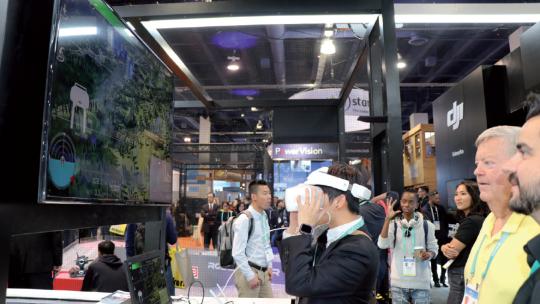 A CES attendee experiences DJI's product at the Shenzhen-based company's exhibition space at CES 2020 in Las Vegas on Tuesday. The Chinese company is a leader in camera drone technologies. （LIU YINMENG/CHINA DAILY）

China Night, an annual mixer event first held in 2017 by the Chinese Consulate General in San Francisco, has become a must-attend among leading Chinese companies at CES.

Business representatives and officials from China along with Nevada state officials attending the Consumer Electronics Show vowed to deepen collaboration and make good use of the platform to build partnerships.

"We aim to bring the business leaders together," said Wang Donghua, consul general in San Francisco, at Monday's event, "and help them forge stronger partnerships."

Chinese companies and their American counterparts use the platform to communicate, to better understand each other, and to introduce services and products, said Yang Yihang, economic and commercial counsel at the consulate.

Calling Las Vegas "the pearl of the state of Nevada", Wang said the bilateral economy is "closely intertwined", and "there is enormous potential between China and Nevada and Las Vegas for business communities on both sides to explore".

China is the largest trading partner of and fourth-largest export destination for Nevada, Wang added.

Tourism is the fastest-growing sector for economic exchange between China and Nevada.

For example, technology and innovation have gained momentum in recent years and produce many high-paying jobs, he said.

Both Wang and Sisolak believe cooperation on the subnational level is vital. The current trade friction between the two countries "is not good", Sisolak said. "We need to move forward."

John Rhee, Unitech senior vice-president and general manager for North America, said, "If we don't collaborate, we will fail."

Craig McKinney, director of international affairs for the Kentucky Cabinet for Economic Development, said that besides Kentucky Fried Chicken (which is a household name in China), "we have much more for Chinese companies to develop their business", said McKinney.

He said 10 Chinese companies have established a presence in Kentucky, and "more will come soon".