Hamlet resurrected for a second soliloquy 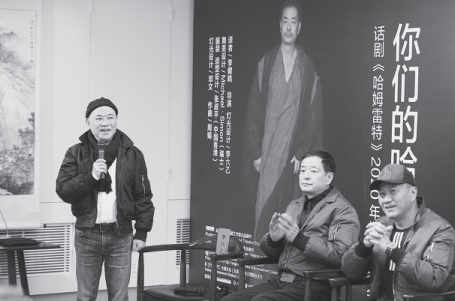 From left: Director Li Liuyi, actors Pu Cunxin and Hu Jun attend a news conference of the second round of performances of The Tragedy of Hamlet, Prince of Denmark in Beijing on Dec 24. (CHINA DAILY/WANG JING)

For Chinese director Li Liuyi, the attempt to adapt the classics for the stage started with his interest in literature. In his latest take on William Shakespeare's revenge-tragedy Hamlet, Li, who worked with a group of veteran Chinese actors, including Pu Cunxin, Hu Jun and Lu Fang, broke with tradition while still keeping the richness of the original story.

Premiering on Nov 28, 2018 at the National Center for the Performing Arts in Beijing, the Chinese play, titled The Tragedy of Hamlet, Prince of Denmark, has toured not just in China, but also abroad, including with shows in Singapore and London.

On March 12, the play will launch a second round of performances, with four shows at Beijing's Poly Theater and then visits to Sichuan, Chengdu province, Chongqing and Guangzhou of Guangdong province and Shanghai.

"When we started working on adapting Shakespeare's plays, we kept asking questions, all kinds of questions that could help us to understand the playwright's intention. His ways of telling stories, portraying characters and the conversations all make his work timeless," says the director.

Actor Pu is known for interpreting the title role in Chinese director Lin Zhaohua's pioneering version of the play in 1990. In Li's adaptation, however, Pu plays the role of Claudius and the ghost of King Hamlet.

In 1990, actor Hu, who was a student of the Central Academy of Drama, played the role of gravedigger while in Li's version, he plays the lead.

"Of all the works of Shakespeare that have graced the theaters in China, Hamlet is arguably the most famous among Chinese audiences. It has been adapted many times in China," says Li in Beijing. "It's like a tradition being passed down from one generation to another."

"For young people, they share similar feelings about being lost, confused and disappointed about their lives. As director Lin said, 'everyone is Hamlet'," says Pu, 66, who retired from the Beijing People's Art Theater last year.

With Li's version, he hopes audiences get involved.

"When I created this play in the rehearsal room with the actors, it's about 'our' Hamlet, but when it's staged in theaters in front of the audience, it becomes 'their' Hamlet," says Li, who also works with the Beijing People's Art Theater and whose work covers traditional Chinese operas, avant-garde plays, Western operas and ballet.

In 2017, Li directed the Chinese version of Shakespeare's King Lear by working with the NCPA.

The story of Hamlet was first translated into Chinese in 1921 by Tian Han (1898-1968) and since then, many Chinese scholars have attempted to translate the work of Shakespeare.

Hu rarely performs in theaters. Instead, he has made a name with roles in movies and TV dramas, such as the blockbuster action films Red Cliff (2008) and Bodyguards and Assassins (2009). His real-world wife, Lu, plays both Ophelia and Hamlet's mother Queen Gertrude, now married to Claudius, in the play.

"The stage set is very abstract and conceptual－just a giant ball, a bunch of flowers, two swords and a skeleton－so it relies on solid acting skills to tell the story," says Hu. "What excited me the most was breaking my acting habits that were shaped by my experience of starring in movies and TV dramas. I was inspired by the director and other actors to imagine and express wildly."

Li says when he announced that the roles of both Ophelia and Hamlet's mother Queen Gertrude would be performed by the same actress, many people were doubtful about whether the idea would work.

But Lu, who offers no obvious cues to distinguish between the two characters－neither costume changes, nor a changing of her voice－still manages to convince audiences that the two are different purely through her acting technique, even if she is simply walking across the stage from one side to the other.