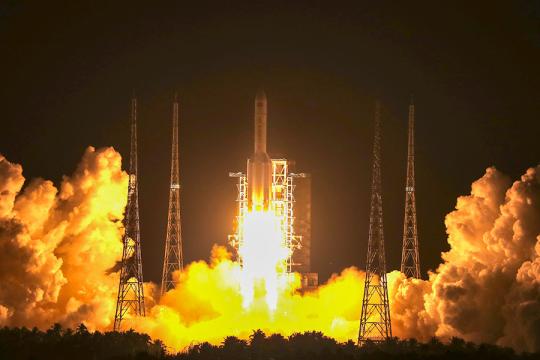 Shijian 20, a technology demonstration satellite developed by the China Academy of Space Technology in Beijing, was lifted by a Long March 5 carrier rocket at the Wenchang Space Launch Center in Hainan province on Dec 27 and reached its preset position in a geosynchronous orbit about 36,000 kilometers above the Earth on Sunday, according to China Aerospace Science and Technology Corp, the nation's major space contractor.

The satellite performed seven orbital maneuvers before flying into orbit. Its components functioned well during those processes, the company said in a statement.

Shijian 20 is the second satellite based on China's new-generation satellite platform, the DFH 5, after the Shijian 18 that was lost during Long March 5's failed second flight in July 2017.

The spacecraft's major tasks are to test the overall design and reliability of the DFH 5 platform as well as to verify several key space-based technologies and new equipment, according to the statement.

With a liftoff weight of more than 8 metric tons, the satellite carries more than 10 world-class technological payloads and is equipped with the country's largest, longest and most sophisticated solar arrays.

It is expected to function for at least 16 years in space.

Zhou Zhicheng, chief engineer at China Academy of Space Technology and project manager of Shijian 20, said that compared with DFH 5's predecessors, the new platform features larger carrying capacity, higher transmission capability and longer life span and will better serve the needs of high-capacity satellites in the next 20 years.

Hao Yanyan, a supervisor in the Shijian 20 program, said that DFH 5 can be the basis of a wide range of satellite models for different operations ranging from high-orbiting communication and microwave remote sensing to space-based scientific exploration and technological experiments.

She explained that each DFH 5-based satellite is three times stronger than those developed on its most recent predecessor, DFH 4, in regards to operational capacity.