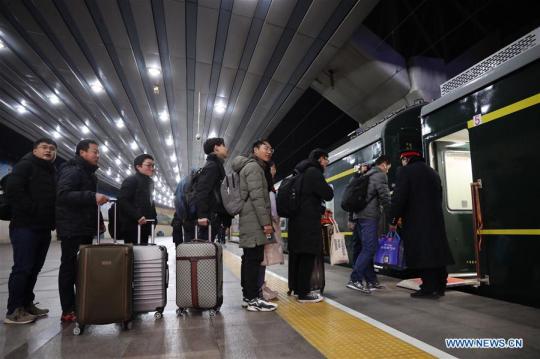 Passengers prepare to board the train K4051 to Nantong city in East China's Jiangsu province, at the Beijing Railway Station in Beijing, on Jan 21, 2019. [Photo/Xinhua]

Over 300 million train tickets for the Spring Festival travel rush have been sold after the presale kicked off on Dec 12, 2019, according to the latest statistics from China's railway operator.

About 14.43 million tickets were sold via the official 12306 online booking services on Thursday, accounting for 88.4 percent of the total.

Popular trains of the day are return trips to major cities like Beijing, Shanghai and Guangzhou, with tickets almost sold out.

Thanks to the nationwide promotion of electronic tickets, travelers can use their ID cards to enter and exit train stations instead of using paper tickets for boarding, according to the CSRC.

The upcoming Spring Festival holiday is a traditional time for family reunions, while the travel rush will last for 40 days from Jan 10 to Feb 18.