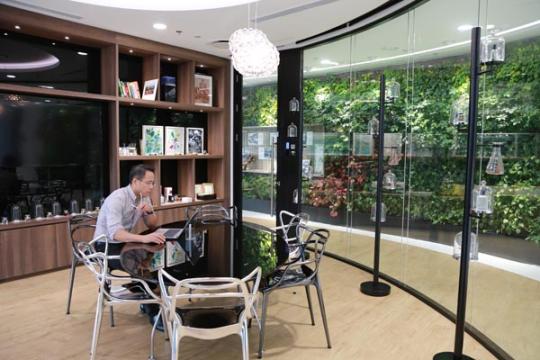 Liu Rongming, the principal perfumer of Firmenich, has been working on scents for the Swiss fragrance company for 24 years. (Photo provided to China Daily)

The nose is a part of the body that many people don't require for their careers. For Liu Rongming, this organ is indispensable.

The principal perfumer at the Swiss fragrance company Firmenich, Liu has spent the past 24 years distinguishing scents and conveying abstract concepts and moods behind fragrance compositions.

That Liu is working for Firmenich says much about his ability-the company is among the best in the world when it comes to crafting fragrances. Other top fragrance-makers include Givaudan, International Flavors and Fragrances and Germany-based Symrise.

Liu is also a member of the rare batch of Chinese who are working for top scent companies. Most master perfumers are Westerners.

In his role, Liu is responsible for creating fragrances for body care and home care consumer products. In 2019, he created more than 100 scents.

Liu, who has a PhD in analytical chemistry, first learned of the profession during a weekend gathering. Intrigued by the work of perfumers, he became a trainee at Firmenich for five years before earning his stripes in 2000.

Another renowned institution where people learn the ropes of this niche trade is the Givaudan Perfumery School in Argenteuil, France. Founded more than 70 years ago, this elite institution receives thousands of applications a year but only accepts one or two students.