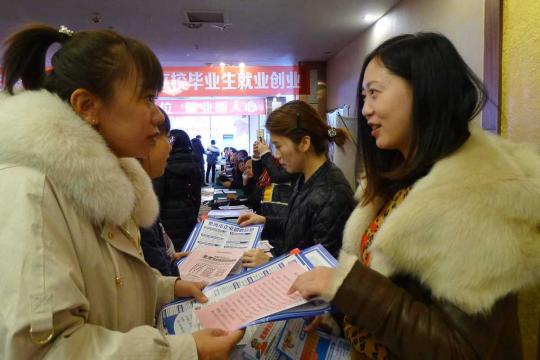 China is working to stabilize the job market by supporting its employment-first policy and improving mechanisms for securing full, high-quality employment, according to a recent State Council guideline.

Six measures are included in the guideline, released on Tuesday, to help stabilize the job market and avoid the potential for elevated unemployment.

Service businesses, including domestic services, tourism and nursing, would get support for encouraging more job creation.

The government will provide more financial support to private enterprises and small and medium-sized enterprises to help them in the domestic market, while their job cuts will be regulated. Flexible employment and entrepreneurship will be emphasized to invigorate the job market. Loan application requirements for people wanting to start small and micro businesses will be relaxed.

Large-scale skill training courses will be provided to the jobless under age 20 and those unable to obtain higher education after junior or senior high schools. Financial assistance will be given to those in training courses.

"Though we face great pressure in employment given the current economic landscape, the government is taking positive measures to stabilize the job market," said Chen Lixiang, vice-dean at Peking University's China Institute for Occupation Research. He said pressure on employment comes from adjustments in the domestic economic structure and the international landscape.

"Information technology also is bringing a revolution to the job market with automation," he said. "The emergence of the virtual economy did create some new professionals but it also shocked the real economy and people who serve the real economy."

"The economy is growing healthily, which is important for boosting employment," Chen said. "There is pressure on the job market, but it won't become too great."

In March, the employment-first policy was elevated to an important national policy, joining fiscal and monetary policies, for the first time this year.

As of the end of November, there was continuous and stable growth in employment with about 12.79 million new urban jobs created this year, outperforming the target of 11 million set in March, according to the National Bureau of Statistics. Based on an NBS survey in November, the national jobless rate that month was 5.1 percent. Among people 25 to 59 years old, the rate was 4.6 percent, roughly unchanged from October. The unemployment rate is within a reasonable range, the NBS said in a news release.