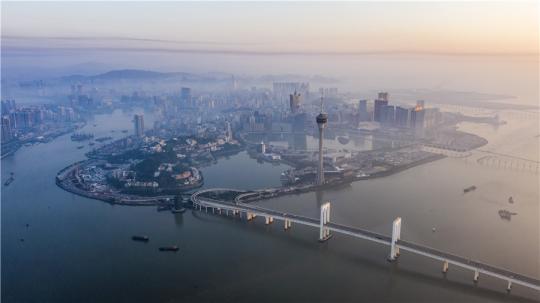 This year marks the 20th anniversary of the return of the Macao Special Administrative Region to the motherland. (Cheong Kam Ka/Xinhua)

Macao has made great strides in economic development and achieved prosperity and stability, but it will need to diversify its industry and better integrate into mainland economic plans, said Ho Iat-seng, incoming chief executive of the Macao Special Administrative Region.

Ho said a stable society is the prerequisite for good development, and without the "one country, two systems" policy, there would be no stable economy to ensure a stable society.

"We will work together toward one goal, which is to build a more prosperous and beautiful Macao and make sure the 'one country, two systems' principle goes far and remains steady," he added.

Ho was elected as the Macao SAR's fifth chief executive on Aug 25 and will take office on Friday, the 20th anniversary of Macao's return to China.

Born in Macao in 1957, Ho witnessed the large, rapid changes Macao has experienced since its return to the motherland. The region's once depressed economy has grown continuously during the past 20 years, with its GDP soaring to 444.7 billion patacas ($55.4 billion) in 2018 from 51.9 billion patacas in 1999.

Macao now has a very high average monthly salary of about $2,400, much higher than many cities in the Chinese mainland and some developing economies in Southeast Asia, and has reached high levels of social welfare expenditures.

Ho attributed the rapid economic development and continuous improvement of people's livelihoods to the accurate implementation of the "one country, two systems" principle.

He said things that will remain unchanged for Macao's future development are the guidance of the central government, societal stability, good traditions of patriotism and the gaming industry, which serves as the main source of Macao's tax revenue and sustains the economy and the SAR's welfare.

However, he added that Macao also needs to moderately diversify its industries and avoid depending too much on gaming. Although in recent years, Macao has tried promoting exhibitions and import and export businesses, they still cannot equal the dominant gaming industry.

"We need to choose industries that have high added value and are suitable for Macao's production and manufacturing," he said.

Another priority is the integration into the Guangdong-Hong Kong-Macao Greater Bay Area, an initiative that connects Hong Kong, Macao and nine neighboring cities in Guangdong province to form an economic powerhouse.

To leverage its strengths and capitalize on the opportunities brought by the development of the Greater Bay Area, Macao will build an international tourism center highlighting its fusion of Western and local cultures. The SAR also will serve as a new base for Sino-Western exchanges, particularly with Portuguese-speaking countries, to contribute its part to the Belt and Road Initiative.

Ho served as president of Macao's legislative assembly from 2013 to 2019. Speaking of his change in roles, he said it was like shifting from being a referee to an athlete, and one of the biggest tasks is to run the government by law.

"In the legislative assembly, I pointed out the government's problems and offered suggestions on how to solve them, so I know how and where to make improvements," he said.