Macao satellites to be launched in 2021 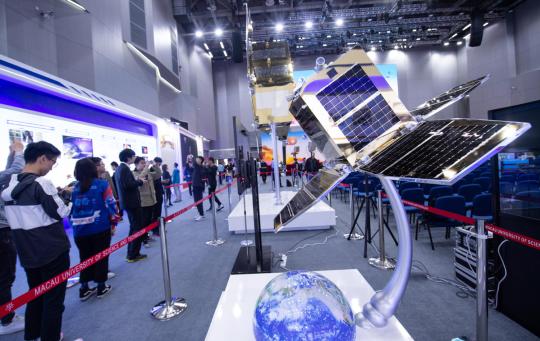 A model of the space exploration satellite Macao Science 1 is on display at an exhibition in Macau University of Science and Technology, on Dec 15, 2019. (Photo/Xinhua)

The first satellites from the Macao Special Administrative Region will be launched into space in 2021 to carry out scientific missions, according to the China National Space Administration.

The administration said in a statement on Sunday that the Macao Science 1A and 1B are being designed at the State Key Laboratory of Lunar and Planetary Sciences at the Macau University of Science and Technology.

According to the university, the satellites will work in a near-equatorial orbit and are expected to monitor the geomagnetic field and space environment of the South Atlantic Anomaly area and help scientists obtain world-class data related to topics such as geomagnetic reversal, core-mantle interactions and the operational safety of spacecraft.

The program is supported by the Macao government, the central government's liaison office in the region and the space administration. Several domestic and foreign institutes including Northwestern Polytechnical University, Harvard University in the United States and Swiss Federal Institute of Technology in Zurich are involved in the program, according to the Macao university.

Alexis Tam Chon-weng, secretary for social affairs and culture in Macao, said that the satellite program is an opportunity to foster the city's science and technology developments, and the SAR government will give it full support.

Tian Yulong, deputy head of the space administration, said the program will make use of Macao's advantages in science and technology fields and will boost innovation endeavors in the Guangdong-Hong Kong-Macao Greater Bay Area.

According to a media report, the State Key Laboratory of Lunar and Planetary Sciences proposed the satellite program to the space administration around October 2018 and soon received approval. The satellites' designs were completed and approved in February.

In another development, the space administration announced on Sunday that its Macao Center for Space Exploration and Science has been established at the university.