UN climate talks end with no deal on key issue 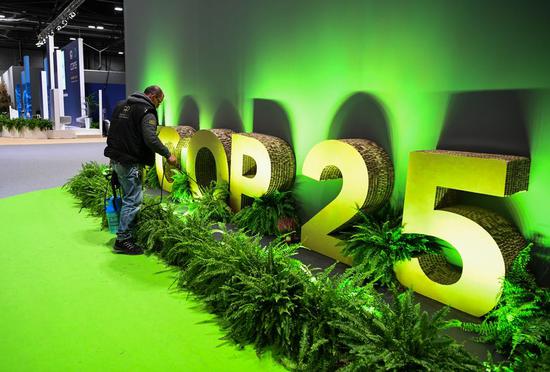 The UN Climate Change Conference (COP25) came to an end on Sunday after an unprecedentedly long extension, as negotiators failed to reach an agreement on Article 6 of 2015 Paris Agreement about the details of the carbon market mechanisms.

The negotiations were scheduled to end on Friday but continued throughout Saturday and into Sunday morning. With over 40 hours of extension, it was the longest COP in history, which was quite usual to be extended due to intense discussions.

"We had so many talks till so late, without sleeping all night," said Carolina Schmidt, chairwoman of the COP25 and the environment minister of Chile, at the closing plenary of the conference that ended Sunday afternoon.

Over the past two weeks, delegates from almost 200 countries focused on Article 6 of the 2015 Paris Agreement, which is about some technical details of the implementation of the deal in building the market mechanisms, especially the global carbon market.

"We want to close Article 6... which will generate resources to bring about projects, and the projects would allow us to move toward sustainable development... The Mechanisms contribute to helping us to move forward," said Schmidt.

"Clearly it is said to reach the agreement, but we were so very close. I thank you for your efforts, the long hours and achieving agreement we were on the edge. We have concrete progress on concrete texts to allow us to look ahead with hope," according to Schmidt.

At the closing plenary, delegates from most countries express their regret or frustration of failing to achieve the agreement on Article 6. The work will be left for further discussion on the next congress COP26, which is scheduled to be held in Glasgow next year.

In a statement issued after the closing plenary, the Chinese delegation said China played a positive and constructive role during the event. Although the agreement about Article 6 was not reached, China will promote that all parties concerned to reach the consensus as soon as possible.

"The results of the congress are below our expectations, especially that the core issue, talks over the implementation details of Article 6, had reached only a procedural conclusion. I believe that all of us feel regretful, and it cannot match our efforts," said Zhao Yingmin, head of the Chinese delegation and vice minister of the Ecology and Environment, at the closing plenary on behalf of the so-called BASIC countries -- China, Brazil, India and South Africa.

Zhao said China will work with other parties to address the "last mile" of the implementation of Paris Agreement and carry out South-South cooperation on climate change.

Participating countries also had differences in the ambitions of addressing climate change, as some countries want to have more ambitious goals, but others want to stick to the goals stipulated in the Paris Agreement.

Among the adopted documents include the "Chile-Madrid Time for Action" agreement that lays the groundwork for countries to present more ambitious Nationally Determined Contributions (NDCs) by 2020 in response to the climate emergency.

It expresses the "urgent need" for these new commitments by countries to bridge the existing gap with the Paris Agreement target of avoiding a temperature increase of more than 1.5 degrees Celsius.

According to a statement issued by the Spanish Ministry for the Ecological Transition, COP25 reaffirms the value of multilateralism and international cooperation to solve a global challenge such as climate change.

"Even in complex global contexts, COP25 did not drop the climate agenda in a crucial time for the implementation of the Paris Agreement. On the contrary, it has shown an activist multilateralism," said Spanish environment minister Teresa Ribera.

The conference shifted from Chile to Spain at the last minute due to unrest in Chile's capital Santiago.

Over 26,000 people came to the Spanish capital for the event, including people from NGOs, private sectors and multilateral institutions who promoted global cooperation for addressing climate change, while many climate activists held multiple protests outside the congress venue and in downtown Madrid.