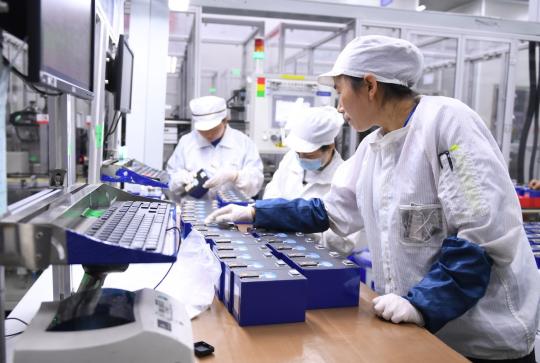 As domestic market opens up, companies look for opportunities overseas

Sales of new energy vehicles in China had fallen for five straight months by November, making it very likely for the segment to see its first annual fall in more than a decade.

A total of 1.04 million electric vehicles and plug-in hybrids were sold in the first 11 months of the year, up 1.3 percent from the same period in 2018, according to the the China Association of Automobile Manufacturers.

However, due to a high comparative basis in December, it will be exceedingly difficult for sales this year to reach the record number of 1.25 million seen in 2018, said the industry organization last week.

For Chinese battery makers, a grimmer sign is the recent inclusion of Tesla's Model 3 cars, being built at its $2 billion factory in Shanghai, as well as some models from Mercedes and Toyota into a list recommended for government subsidies.

None of those models use batteries from Chinese companies, which previously was a prerequisite for new energy vehicles to be qualified for financial subsidies from the government.

Over the past few years, because of the generous incentives, new energy vehicle makers have been choosing Chinese battery suppliers and thus helped spur their fast growth.

Local companies CATL and BYD have emerged as giants in the power battery segment, with CATL securing more than 50 percent of the market share in the country by the end of the third quarter this year.

As China opens its battery segment to international companies, local makers may have to work harder to take international giants headon.

Analysts said as soon as there are new and reasonable choices, it is inevitable that some of CATL's current customers will start to do business with other battery makers to prevent putting all eggs in one basket.

CATL and BYD may have to lose some market share while the smaller battery makers, which number around 100 in the country, may find it exceedingly difficult to survive, they said.

According to SNE Research, the cost of batteries per kilowatt-hour at SK Innovation and LG Chem is around 100 yuan ($14.32) cheaper than at CATL.

The plant in Changzhou, Jiangsu province, is a joint venture by SK Innovation, BAIC Group and Beijing Electronics. Its annual production capacity is 7.5 gigawatt-hours, which is enough to supply batteries for 150,000 electric vehicles.

Construction of the joint venture will get underway later this year. When completed by the end of 2021, it is expected to have an annual production capacity of 10 GWh, and the batteries will be installed on Geely's vehicles from 2022.

Geely President and CEO An Conghui said the joint venture further strengthens the carmaker's position as a leader in new energy vehicles. The South Korean company said it would also pursue joint ventures with other carmakers.

"Through the joint venture, LG Chem has secured a stable structure to provide batteries for electric vehicles in the Chinese market," the company said in a statement.

CATL said it will scale up its investment in a production and research base in Germany to 1.8 billion euros ($2.05 billion).

"Europe is a key market for CATL, and many of our partners are based in Europe," said Matthias Zentgraf, president of CATL's European operations, during the Frankfurt motor show in September this year.

"Our new manufacturing plant in Erfurt, Germany, will allow us to combine Germany's industrial tradition and CATL's tradition of innovative battery technology in a strategically central location," he added.

Another Chinese battery maker, Svolt, said it will spend 2 billion euros on its European base, which is expected to start production in 2022. The battery maker spun off from Chinese carmaker Great Wall Motors in 2018. It will offer batteries for electric MINI-branded vehicles that will be made in China starting from 2023.