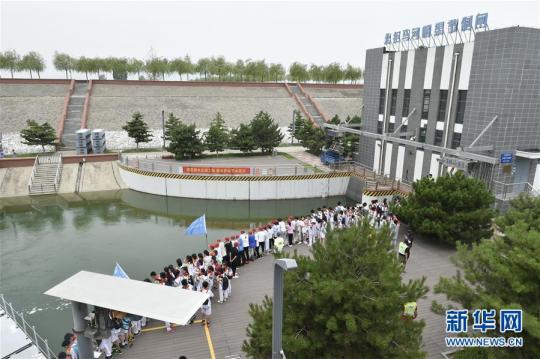 China's massive water diversion project has transferred 5.2 billion cubic meters of water to Beijing over the past five years, ensuring supplies to the public and improving the city's water resource structure, a senior official said on Thursday.

The first phase of the South-to-North Water Diversion Project has not only provided residents with a stable supply of water but has also helped replenish Beijing's reservoirs and waterways since it went into operation in December 2014, said Liu Guangming, deputy head of the Beijing Water Authority.

Of the total water volume, 3.5 billion cu m went to water treatment plants. Up to 600 million cu m went to six reservoirs in suburban Beijing and the rest was added to rivers, lakes and underground water as a supplement, the authority said.

"Water from the south has also ensured supplies for key projects, including the new Daxing International Airport," he said, adding that groundwater in the capital increased by 1.62 billion cu m during the same period.

From 1999 to 2014, Beijing's water table had been subsiding at an average rate of 1 meter per year. Since diverted water started flowing, the city's water table reversed itself and has risen by about 3 meters as of May from the corresponding level in 2015.

According to the authority, many dry springs in villages in Changping, Huairou and Yanqing districts began flowing again this year thanks to the water added by the project.

Resident Zhao Feiyan said there had been a thick mineral deposit at the bottom of tea kettles before the new water came to Beijing.

"Since then, the taste of tea has improved," Zhao said.

China's water availability per capita is 28 percent of the global average. Water is abundant in the southern part of the country but naturally scarce in the north, an imbalance the diversion project was designed to address.