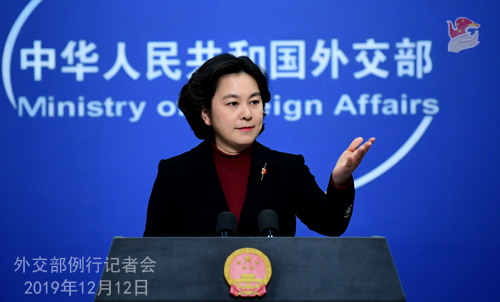 Beijing urged politicians and media in the West on Thursday to overcome their "paranoia" about China by embracing openness and inclusiveness and achieving win-win cooperation.

They should also abandon their zero-sum attitude and cold-war mentality and treat other countries according to the principle of equality and mutual respect, Foreign Ministry spokeswoman Hua Chunying said at a daily news conference, after scholars in Australia and the United States published articles about their countries' relations with China.

The Australian Financial Review published an opinion piece entitled "Our China panic is stepping into the world of paranoia" on Tuesday, written by James Curran, a history professor at the University of Sydney.

In a recent article published in Foreign Affairs, CNN anchor Fareed Zakaria said China is "a remarkably responsible nation on the geopolitical and military front", and a cold war with China would impose "immense" costs on the US and distort its economy.

Hua praised the two for their "objective and rational attitude toward China-related issues, and the courage and insight they have shown".

Some politicians and media in the West are so "paranoid" that they oppose China whenever discussing the country, she said.

They use whatever they can to smear China, even ignoring their consciences, Hua said, adding that the root cause for such phenomena is that they don't view China in the right way.

"We are open and aboveboard in both our policies and actions. We fight when it is necessary, only to win the equality and dignity we deserve," she said.

Just because China is a large country doesn't mean it's threatening, and people who are obsessed with their fear of China will "only leave a legacy full of trouble", Hua added.