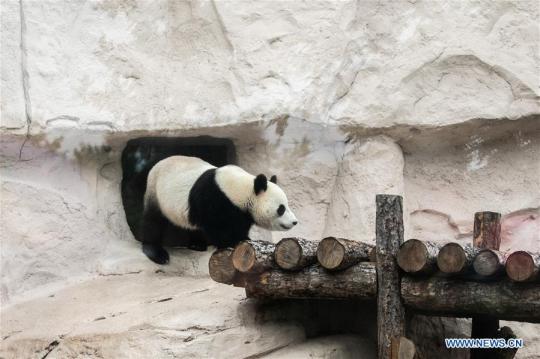 Giant panda Ru Yi is seen at the Moscow Zoo in Moscow, capital of Russia, July 31, 2019. The Moscow Zoo celebrated birthday for two giant pandas Ding Ding and Ru Yi that arrived from China in late April for a 15-year scientific program. (Photo/Xinhua)

Pandas get ready for their first Russian winter

Fans of Moscow Zoo's two giant pandas, Ding Ding and Ru Yi, will be able to watch their first winter at the new home after their arrival from China on a live webstream, zoo managers have revealed.

The pair are reported to be settling in well, and more than 20 high definition cameras have been installed at the zoo by Hikvision, a leading camera manufacturer based in Hangzhou, Zhejiang province.

The cameras are equipped with some of the most advanced monitoring technologies available, the company says, which will give people from all over the world constant access to their daily lives. Even in the dark of night, the cameras are still able to capture the pandas' movements clearly.

Broadcasting began with a physical examination, which was shown live, to mark their half-year anniversary at the zoo. With help from keepers from both China and Russia, Ru Yi was weighed, did some squats, had his teeth examined and had a blood sample taken from his paw.

The pandas are now the zoo's "biggest stars", said Svetlana Akulova, general director of the zoo.

She said the pair are healthy, and full of curiosity and enthusiasm. They have adapted well to life in the Russian capital and look forward to their first snowy and icy Russian winter.

Ding Ding and Ru Yi live in the Chinese Fauna Pavilion, and wake up early every day before eating bamboo in the open air. They have a regular supply of educational toys regularly, Akulova said, including balls, tumblers and plastic rollers.

"We hope the live steam will help to avoid overcrowding in the pavilion, and, most importantly, to protect animals from unnecessary stress," she added.

"It is not enough to spend the whole day at the bamboo bears' open air cage to get acquainted with their unusual habits. Online streams will facilitate the process, providing an opportunity to watch pandas looking for hidden treats, eating fruit ice and playing every day.

"Besides, those who live outside Moscow and cannot visit the zoo will have an opportunity to watch pandas live. Pandas at the Moscow Zoo are a long-awaited event and a great delight for us we certainly wish to share," she said.

Ding Ding, born in 2017, and Ru Yi, born in 2016, arrived at the Moscow Zoo as part of an international program for giant panda preservation, protection and research at the end of April this year, and they will remain at the zoo for 15 years.

The opening ceremony of their house in June was held in the presence of China's President Xi Jinping and his Russian counterpart Vladimir Putin.

"We are very proud of our part in the initiative aimed at protecting nature and in the study of rare animal species like the giant panda. It is one of the most important scientific activities by the zoo," Akulova noted.