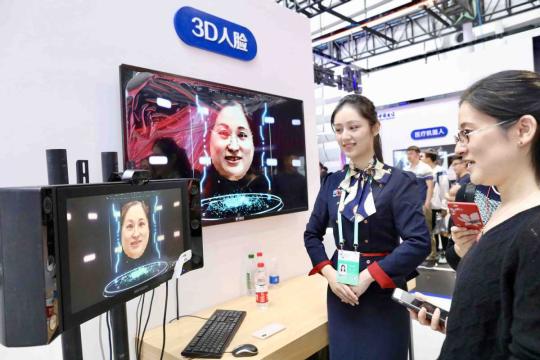 A visitor tries 3D facial recognition tech on Tuesday at the Light of Internet Expo of the sixth World Internet Conference in Wuzhen, Zhejiang Province. (Photo by Zhu Xingxin/China Daily)

Questions asked about how technology used

People in Zhengzhou, capital of Henan Province, can now use the subway through facial recognition technology.

Introduced in September, facial recognition is available to passengers who link their online payment systems to the subway's smartphone app.

However, one traveler, Feng Yi, 25, who works for a tourism company in the city, voiced his concerns. "I feel uncomfortable because I don't know why the company is using my facial details, or whether they will be leaked," he said.

"Scanning people's faces in public places makes me feel unsafe, especially when the technology is being adopted elsewhere, such as banks, colleges and hotels."

He also questioned the need to collect facial information, saying that when he registered online accounts, he provided his phone and identity card numbers and his fingerprints. "I can hardly refuse to use the technology, as it is a precondition or obligatory for using some apps," he added.

Facial recognition is also being adopted in other cities. For example, Beijing subway authorities said last month that they were testing such a system in preparation for introducing it to help speed up security checks.

Heated debate on the legitimacy and ethics of using facial recognition spread on social media platforms after a face-swapping app named Zao allowed users to imitate celebrities from blockbuster movies or hit TV series through the use of artificial intelligence.

Zhao Zhanling, a legal researcher at the China University of Political Science and Law, said growing public concern over facial recognition is understandable

"Compared with ID and fingerprint information, facial recognition can help identify a person more accurately," he said. "If such information is collected improperly or leaked, the risks will be considerable."

Widespread use of the technology has heightened such concerns, because there is no law in China to regulate the use and collection of facial information, he said, suggesting that app operators, public service providers and government departments be more careful in preventing abuse of the technology.

Li Ya, a lawyer from the Beijing Zhongwen Law Firm said, "The technology is no problem, but its adoption must be regulated before a special law is introduced."