'Legendary' teacher is not the retiring type 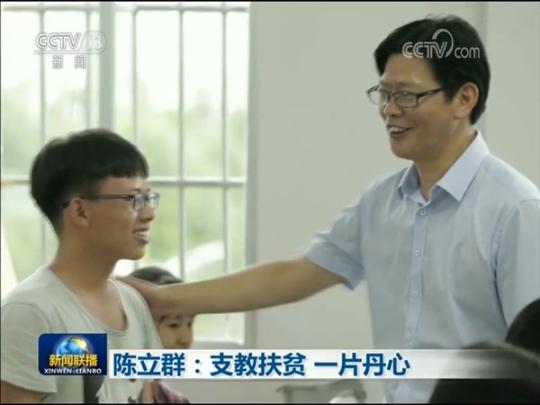 After working as a principal at a top school in a prosperous province, it was not an easy decision to pack up and move to a rural high school in an impoverished area - especially when you have just retired.

However, for Chen Liqun, a renowned high school headmaster in Zhejiang province, taking over a village school in southwestern China's Guizhou province was a good way to give back to students.

Chen, now 62, worked as a teacher and principal at high schools in eastern China's Zhejiang province for 34 years. He retired from Hangzhou Xuejun High School, a top-ranking school in the provincial capital, in 2016, and like many of his peers could have gone on to make a lot of money.

Educators with Chen's experience are in high demand at private schools, and have the potential to rake in an annual salary of more than 2 million yuan ($283,000).

He instead volunteered to take charge of Minzu High School in Guizhou's Taijiang county, 1,400 kilometers from his home.

"I'm much happier to see an impoverished student enter the gates of a university rather than earn much more money," Chen said. Brought up in a rural part of Lin'an county, Hangzhou, Chen said he hoped to help children who are in the same situation that he was once in.

Taijiang is home to the Miao ethnic group and still regarded as a poverty-stricken area.

Minzu High School is the only public school in Taijiang. Before Chen's arrival in 2016, only about 100 students, or 10 percent of the school's population, obtained high enough scores in the national college entrance exam to enter college. At top schools in Zhejiang the rate is as high as 100 percent.

The student's parents had low expectations for their children and teachers struggled to implement their goals, resulting in a low college enrollment rate, according to Chen. Every year, more than 100 students dropped out and others, with brighter academic prospects, transferred to better schools.

Su Gaosheng, the school's deputy principal, said: "Rather than being a good place to study, the school couldn't ensure its students received an adequate education due to its chaotic management."

Chen began with the basics. In the first two months of his tenure, he took measures to improve the cafeteria and dormitories with the aim of providing better dining and living conditions for students and teachers. He then focused on improving students' academic performance by getting teaching roles back on track.

A slew of regulations on campus management and teaching standards were introduced, and teachers were sent to Hangzhou for training courses. Chen visited classrooms from time to time to supervise teachers' preparations for classes.

Ren Weijuan, an English teacher at the school, said stricter management and better training significantly improved the learning atmosphere in the classrooms. "The school's 55 classrooms became orderly, with more students dedicated to their study missions," she said.

Chen encouraged students to make learning and hard work their priorities in order to achieve their life goals. "As educators we need to help our students make their objectives clear and strive to grasp more knowledge on their path toward higher academic institutions," he said.

Last year, 450 of the 901 senior students were enrolled in universities and colleges, proof that Chen's methods worked.

In Taijiang, most students are left-behind children from poor families, whose parents have moved to cities in search of work.

At the beginning of his tenure, Chen visited these students and their families and tried his best to help them. Many students call him "father" for the care and affection he has shown in both words and deeds. "Taijiang's education sector feels so proud to have such a legendary teacher and principal like Chen," said Long Feng, director of Taijiang's education department.