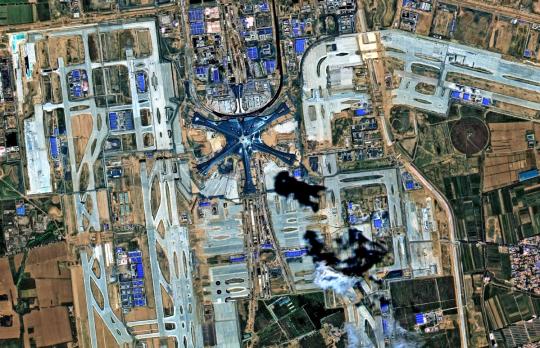 A high-resolution camera on the Gaofen 6 satellite took this photo of the new Beijing Daxing International Airport. (Photo provided to China Daily)

China has launched a website to give people around the world access to Earth images and planetary data generated by its Gaofen-series high-resolution Earth observation satellites.

The website-www.cnsageo.com-is run by China National Space Administration's Earth Observation and Data Center in Beijing and offers 16-meter resolution Earth images and data, as well as daily updated wide-view images, according to a statement from the administration.

Registered users are allowed to check and download images and data generated by China's Gaofen 1 and 6 satellites and can also learn how to use those products, the statement said.

The move is intended to boost international efforts for sustainable development, climate change, and disaster prevention and relief, the administration noted. It said the platform will be helpful in a wide range of fields including resource surveys, environmental monitoring and assessment, natural emergency response and agricultural forecasting.

The launch of the website was announced by the China National Space Administration earlier this week at the GEO Week 2019 event in Canberra, Australia. The event, which began on Monday and will run through Saturday, is being held by the Group on Earth Observations, a Geneva-based intergovernmental partnership of 109 members.

Gaofen 1, the first satellite of China's high-resolution Earth observation system, was sent into space aboard a Long March 2D rocket from the Jiuquan Satellite Launch Center in Northwest China in April 2013. It has a 2-meter-resolution charge-coupled device camera as well as an 8-m-resolution multispectrum imager and four 16-mresolution wide-field multispectrum imagers.

Gaofen 6, launched in June 2018, also by a Long March 2D rocket at the Jiuquan center, is also an optical observation satellite like the Gaofen 1, but with better cameras.

China launched the Gaofen program in May 2010 and listed it as one of the 16 most important national projects in science and technology. The program aims to form a space-based, high-resolution Earth observation network by 2020. More than 10 Gaofen satellites have been launched and are in service.

The latest in the family, Gaofen 7, was launched atop a Long March 4B rocket on Sunday from the Taiyuan Satellite Launch Center in northern China. It is expected to play an important role in land surveying and mapping, urban and rural planning and statistical investigation, according to the China National Space Administration.

Images and data from the Gaofen satellites have been widely used in more than 20 industries across China and have helped reduce the country's dependence on foreign remote-sensing products, it said.