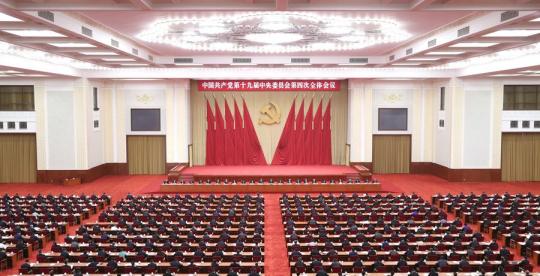 The fourth plenary session of the 19th CPC Central Committee is held in Beijing from Oct 28 to 31, 2019. (Photo/Xinhua)

China will accelerate the improvement of the system of its socialist market economy and will fully unleash the "decisive role" of the market in resource allocation to ensure high-quality development, a senior official said on Friday.

Han Wenxiu, deputy director of the Office of Central Commission for Financial and Economic Affairs, said that China will build a high-standard market system and will improve the protection of property and intellectual property rights, as well as corporate secrets.

Han made the comments at a news conference in Beijing following the conclusion of the Fourth Plenary Session of the 19th Communist Party of China Central Committee.

China also will work to ensure that the government plays a better role and to create better synergy between the "visible and invisible hands", Han said, adding that the country will further improve the system to foster innovation and technological progress and push the development of advanced manufacturing.

The country also will deepen the reform of State-owned enterprises, improve the modern corporate system with Chinese characteristics and boost the competitiveness and innovative capability of the SOEs while continuing to support private businesses, Han said.