After HK violence, flash mobs clean up the mess 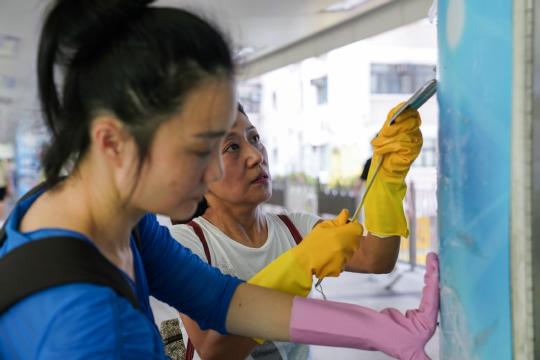 While the rampaging mobs left a trail of destruction in Hong Kong, the flash mobs did just the opposite: clean up the mess left by radical protesters.

A group of more than 30 volunteers gathered at Wan Chai, a business hub, on Sunday morning and began to remove graffiti, anti-government posters, and pick up piles of trash around streets, public spaces and inside elevators.

It took the group about three hours to clean up the mess on a 1-kilometer stretch of the thoroughfare that links Wan Chai to the government headquarters in Admiralty, a frequent target of the radicals.

They removed stickers plastered on a bridge railing, and used hand trowels or power drill brushes to scrape the surfaces clean. Some of them repainted the exteriors of barricades. Their efforts drew applause from passersby.

"It's a flash mob cleanup," declared Ko Chung-kit, a music teacher, who organized the cleaning drive - thich kicked off two months ago - ilong with two of his friends. Sunday was the 10th consecutive weekend that the volunteers had embarked on the exercise.

The idea is to make "flash appearances" in areas previously targeted by anti-government protesters.

During the unrest, radicals, predominantly comprising youngsters, have expressed their ire by plastering public spaces with posters and spraying graffiti on walls.

The cleanup drive is similar to a flash mob. Everything is planned online, word spreads online and the campaign goes viral, while earning praise on social media.

Messages of encouragement have been pouring in from the Chinese mainland, said Ko.

"I feel depressed," said Ko. "But I love this city and the people here. I believe I should step forward and hope more people will follow suit."

His conviction was reinforced after a gang of radicals defiled the Tai Po monument built in memory of the war heroes who died while resisting Japanese aggression. Ko said he wanted to clean the monument by himself one night, but his friends warned him, saying it was "too dangerous".

Hours later, a small group of volunteers set out on the mission. "We must protect those who once protected us," he said.

Ko called upon the city's residents to join the initiative to safeguard their own communities.

The cleanup campaign was an effort to engage young people in a civic exercise. Each time the group ventured out, three to four dozen people from all walks of life came out to lend their support, said Auyeung Fung-ying, one of the three campaign conveners.

Auyeung said many of her friends are afraid to step out alone, fearing they will be bullied online, blackmailed or physically harmed by radicals. Now, she has realized her efforts have encouraged more people to join the exercise.

A part-time dance teacher, Auyeung said her pupils ask her why she was doing this. "Every Hong Kong resident should do his or her bit to help the city heal," she said.

At Admiralty, a man named Ho came out with his wife and six-year-old son to show the boy that community effort can keep the city healthy, while violence and hatred can tear it apart.

Ko said his concern was for the city's overworked civic employees, who needed some help. The municipality employees work long hours. Statistics show a 10 percent shortage in the number of cleaning staff in the city.

"I spend an extra two hours cleaning up the mess on roads apart from my routine work," said a 60-year-old volunteer surnamed Ng on Monday morning, after the Tsuen Wan area was hit by violence and vandalism the previous day.

According to government data, Hong Kong had more than 1.3 million registered volunteers as of June this year, accounting for one-sixth of the city's total population. A majority of them are youngsters.

Another organizer of the volunteer group, Chong Sau-kwan, a businessman, described the flyers littering the streets as a disgrace to the city. He said he had seen investors and tourists raising eyebrows at the abusive language used in them.

Chong said he thinks the cleanup drive gives the people a chance to talk to each other and reduce tensions that lead to depression.

A July report from the University of Hong Kong showed 9.1 percent of Hong Kong people are likely to suffer from depression as against 5.3 percent at the height of "Occupy Central", a civil disobedience movement, in 2014.