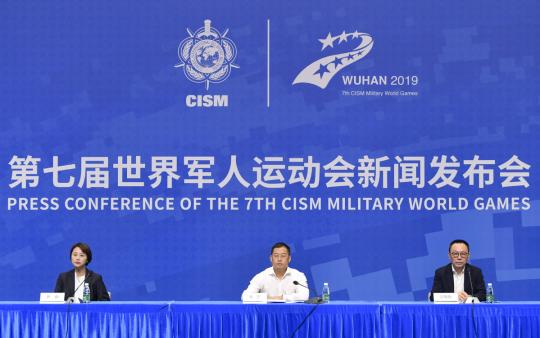 The press conference of the 7th CISM Military World Games is held in Wuhan, Oct. 15. (Photo/Xinhua)

The opening ceremony of the 7th CISM Military World Games will take place this Friday on a high-tech holographic stage in Wuhan, Hubei province, to give the audience an immersive experience, the ceremony's director said on Tuesday.

The event will for the first time use large-scale projection technology, integrated with lighting effects and LED display technology, to showcase the vitality of Chinese culture, said Li Jun, director of the ceremony, at a news conference in Wuhan.

He added the ceremony will utilize a deep fusion of culture, technology and a large stage display.

The ceremony will begin at 8 pm Friday at Wuhan Sports Center Stadium and end at around 10:10 pm.

It will consist of three parts. The first, about one hour long, includes welcoming routines such as emblem displays, a parade of athletes and flags entering the stadium, flag-raising, guest speeches and opening comments by athlete and referee representatives.

The second part features a performance that lasts 50 minutes and the third includes a torch relay and the lighting of the flame, which will burn throughout the games.

A two-hour warmup show will be held before the ceremony at 4:30 pm and will have 23 shows featuring regional and ethnic performances.

Li said the opening ceremony will narrate stories of military characters and culture in a poetic way that are interwoven into the context of Chinese civilization.

It will demonstrate Chinese history, ancient Chinese military culture and its contribution to global military affairs. It will also reflect the traditional Chinese military ideology that "the essence of using force is to stop violence" and convey Chinese people's pursuit of peace since ancient times.

He added that the high-tech elements used in the ceremony will help visually expand the stage's limited space and present a multidimensional visual effect and a 360-degree panoramic view by interacting with moving images.

An opening ceremony rehearsal was held at the stadium on Monday. Li said many people shared their feelings after watching it on social media and called it "overwhelming".

The games, organized by the International Military Sports Council, include 329 events in 27 sports including a naval pentathlon, aeronautical pentathlon, shooting, swimming and basketball competitions.

Nearly 10,000 athletes from more than 100 countries are expected to compete at the games, which end on Oct 28.