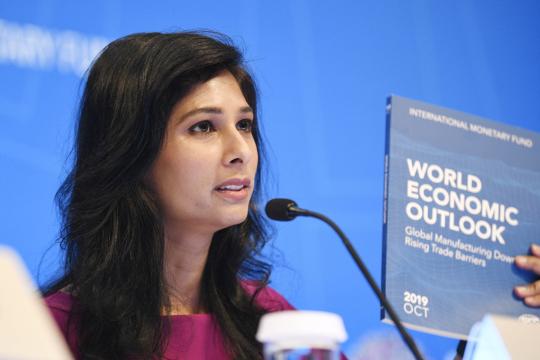 The International Monetary Fund (IMF) on Tuesday lowered its global growth forecast for 2019 to 3 percent in the newly-released World Economic Outlook (WEO) report, down 0.2 percentage point from its estimation in July.

Noting that this is the slowest pace since the global financial crisis, IMF chief economist Gita Gopinath said during a press conference at the global lender's headquarters that "growth continues to be weakened by rising trade barriers and growing geopolitical tensions."

"Growth is also being weighed down by country-specific factors in several emerging market economies, and structural forces such as low productivity growth and aging demographics in advanced economies," Gopinath told reporters at the IMF headquarters.

Advanced economies continue to slow toward their long-term potential, with growth downgraded to 1.7 percent this year, compared to 2.3 percent in 2018, the report showed. Growth in emerging market and developing economies has also been revised down to 3.9 percent for 2019, compared to 4.5 percent last year.

The IMF recently estimated that the US-China trade tensions will cumulatively reduce the level of global GDP by 0.8 percent by 2020, considering the proposed tariff hikes scheduled for Oct 15 and Dec 15. If these tariffs were never to happen, Gopinath said, that would bring down the estimated negative impact on global GDP from 0.8 percent to 0.6 percent.

"We welcome any steps to de-escalate tensions and to roll back recent trade measures, particularly if they can provide a path towards a comprehensive and lasting deal," she said.

Aside from trade tensions, Gopinath also highlighted geopolitical tensions as another downside risk to global growth, warning that Brexit-related risks could further disrupt economic activity, and derail an already fragile recovery in emerging market economies and the euro area.

"To rejuvenate growth, policymakers must undo the trade barriers put in place with durable agreements, rein in geopolitical tensions, and reduce domestic policy uncertainty," she said.

In IMF's assessment, in the absence of monetary stimulus, global growth would be lower by 0.5 percentage points in both 2019 and 2020. The IMF chief economist, however, noted that monetary policy cannot be the only game in town. "It should be coupled with fiscal support where fiscal space is available, and policy is not already too expansionary," she said.

While monetary easing has supported growth, she said, "it is essential that effective macroprudential regulation be deployed today to prevent mispricing of risk and excessive buildup of financial vulnerabilities."

Gopinath said the global outlook "remains precarious" with a synchronized slowdown and uncertain recovery. "At 3 percent growth, there is no room for policy mistakes and an urgent need for policymakers to support growth," she said.

"The global trading system needs to be improved, not abandoned," she stressed. "Countries need to work together because multilateralism remains the only solution to tackling major issues, such as risks from climate change, cybersecurity risks, tax avoidance and tax evasion, and the opportunities and challenges of emerging financial technologies," she said.