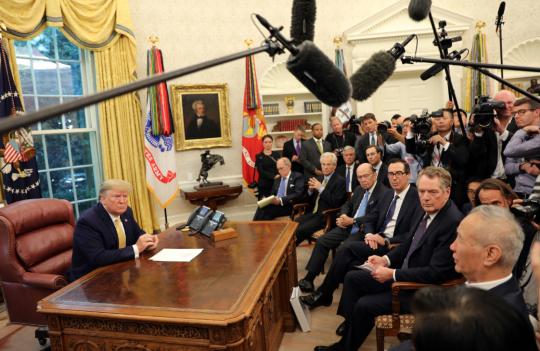 Chinese and U.S. trade negotiators have made "substantial progress" in several fields, including agriculture and intellectual property protection, following two days of intensive talks in Washington. They are being urged to make positive headway in other areas as well.

"With our teams making progress on some parts of the agreement under consultation, it is important we address each other's concerns properly and make positive headway in other areas as well," Chinese President Xi Jinping said in a message to his U.S. counterpart Donald Trump.

The economic and trade teams of the two sides have stayed in communication and shown each other goodwill which has been welcomed by the Chinese and American people and the international community, noted the message, which was delivered to Trump by Chinese Vice-Premier Liu He during their meeting at the White House Oval Office on Friday afternoon.

Liu, also a member of the Political Bureau of the Communist Party of China Central Committee and head of the Chinese side of the China-U.S. comprehensive economic dialogue, was leading a Chinese delegation in trade talks with the U.S. team headed by United States Trade Representative Robert Lighthizer and Secretary of the Treasury Steven Mnuchin.

A healthy and steady China-U.S. relationship serves the interest of both countries and the world at large, Xi said in the message.

"I hope the two sides will act in the principle and direction you and I have agreed to, and work to advance China-U.S. relations based on coordination, cooperation and stability," Xi said in the message, whose English translation was released by the White House late Friday.

Trump asked Liu to convey his greetings to President Xi and again congratulated the People's Republic of China on its 70th anniversary.

"We have great respect for China, great respect for President Xi. And I want to just tell you that I watched the 70th anniversary in great detail, and it was an incredible event," he said, referring to China's spectacular National Day celebration in downtown Beijing on Oct 1.

Trump said he was happy with what he called "a very substantial phase-one deal".

"We very much agree that to get the China-U.S. economic relationship right, it's something that is good for China, the United States and the whole world, and we are making a lot of progress toward a positive direction," he said, according to transcripts released by the White House.

The U.S. president said he hoped both sides will work hard to determine the text of the first phase agreement as soon as possible and continue to promote follow-up consultations.

When asked by China Daily if he would put a stop to the seemingly expanding U.S. blacklist of Chinese companies, Trump said, "We will be looking at the blacklist, and we'll be making a determination as to which companies would be on that list."

On Monday, the U.S. blacklisted 28 Chinese entities for being involved in what it alleges are "human rights violations and abuses". China's Foreign Ministry spokesman Geng Shuang said on Tuesday that China deplored and firmly opposed the move, saying the accusations by the U.S. side are merely made-up pretexts for interference.

They have also discussed follow-up consultation arrangements, according to a statement from the Chinese side released by Xinhua News Agency.

Properly handling China-U.S. trade relations will benefit China, the U.S. as well as the peace and prosperity of the world, Liu said.

He said he hoped the two sides will meet each other halfway, follow the principles and directions set by the two heads of state, properly address each other's concerns on the basis of equality and mutual respect and push forward trade relations of the two countries in a steady and healthy fashion.

Another statement the Chinese side released late on Friday said the two sides discussed and agreed to work together in the direction of a final agreement.

The U.S.-China Business Council said it is pleased the United States and China have reached "a tentative phase-one trade agreement" on Friday, which was accompanied by a suspension of the prospective U.S. tariff increase set for October 15.

"This is an encouraging first phase," USCBC President Craig Allen said. "We await word on how implementation will be measured and in what time-frame, as well as details on scheduling subsequent phases."

Wall Street indexes jumped on Friday following the conclusion of the latest round of trade talks between the world's top two economies.