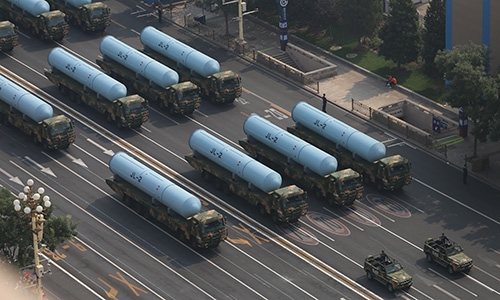 China showcases its JL-2 submarine-launched ballistic missiles for the first time during the National Day parade on October 1, 2019 in Beijing. (Photo: Fan Lingzhi/GT)

China showcased its JL-2 nuclear-capable submarine-launched ballistic missiles (SLBM) for the first time during the National Day parade in Beijing on Tuesday.

The JL-2 is a mature SLBM, and is actually the submarine-launched type of DF-31, and the next generation JL-3 is undergoing research and development, a Chinese missile expert said.

Twelve JL-2 missiles were carried by trucks and reviewed at Tiananmen Square along with the other advanced weapons and equipment of China in active service.

Yang Chengjun, a Chinese expert on missile technology and nuclear strategy and chief scientist of quantum defense, told the Global Times that the JL-2 is a submarine-launched version of the DF-31, an advanced intercontinental ballistic missile (ICBM), and it's a very mature missile already deployed in the People's Liberation Army Navy.

Equipped with the missiles, the Type 094 submarines represent China's first credible, sea-based nuclear deterrent, the US Department of Defense said in a report released in August 2018.

China has reportedly started the development of a third generation SLBM, the JL-3.

An unidentified flying object was seen across several provinces in China in June, which led military analysts to believe it was a test launch of the JL-3, as it coincided with a scheduled military test in the Bohai Sea and Bohai Straits.

When asked about the reported test, China's Ministry of National Defensesaid it was "normal" and "not targeted at any country or objective."

Yang said that the JL-3 is actually the submarine-launched version of the DF-41, the most advanced ICBM, which also made its debut at the parade, and is undergoing research and development.