Why the Yellow River so matters 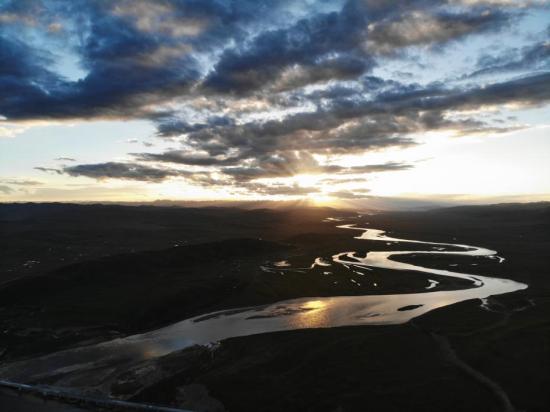 The Yellow River, China's second-longest, is expected to play a more important role in the country's development with new efforts in environmental protection and high quality development in the river basin. Here is some information one needs to know regarding the river's legend, history and geography.

The 5,464-km-long waterway feeds about 12 percent of China's population, irrigates about 15 percent of arable land, supports 14 percent of national GDP, and supplies water to more than 60 cities.

Originating in Qinghai Province, the Yellow River, known as China's "Mother River" and the cradle of Chinese civilization, runs through nine provinces and autonomous regions including Shaanxi and Henan before emptying into the Bohai Sea in east China's Shandong Province.

The river got its name Huanghe in Chinese because of its yellow, muddy water, which appears as it runs through the Loess Plateau in northwest China.

Primitive men, including the Homo Erectus fossil discovered in Lantian County, Shaanxi Province, were found to live in the Yellow River basin more than 1.1 million years ago, which boasts a large number of sites of ancient cultures.

For over 3,000 years, some major dynasties in Chinese history built their capitals in the river basin, making the region the centers of politics, economy and culture in the country.

The Yellow River also witnessed the birth of the four era-defining inventions in ancient China -- printing techniques, papermaking, gunpowder and the compass, which all emerged in the drainage basin.

Ironworks discovered in the region show the technologies of softening cast iron in China came 2,000 years earlier than similar technologies invented in Europe.

"The drainage area of the Yellow River lays the foundation for the 5,000-year-old Chinese civilization. The culture and civilization of the river are the roots of the Chinese nation," said Liu Qingzhu, an expert from the Chinese Academy of Social Sciences.

In Chinese mythology, Da Yu, an ancient hero, tamed the great flood in the river's basin, which reflects the significance of flood control in the region in Chinese history.

Over the past 2,500 years, the Yellow River has broken its dikes 1,600 times and has made 26 major changes in its course in the lower reaches.

To harness the silted river, the Communist Party of China set up the Yellow River water conservancy committee in 1946 in the liberated areas. The flood control in the region has made significant improvement after the founding of the People's Republic of China in 1949.

Dams were built to generate power, and control flood and silt. Large afforestation projects were carried out to reduce soil erosion of the Loess Plateau.

Due to increasing water demand along with economic development, the Yellow River, which accounts for 2 percent of the country's river runoff, experienced cutoffs from 1972 to 1999.

Since August 1999, the river has been flowing without cutoff for 20 consecutive years thanks to the unified allocation of water resources, according to the Yellow River Conservancy Commission under the Ministry of Water Resources.

As an "ecological corridor," the Yellow River, linking the Qinghai-Tibet Plateau, the Loess Plateau and plains in northern China with severe water scarcity, plays an important role in improving the ecological environment, combating desertification and providing water supply with the help of water conservancy projects.

The country has built more than 400 wetland nature reserves and national parks in the river basin.

In recent years, China has made intensive efforts to restore the ecology in areas such as the Qilian Mountains and the Qinling Mountains in the Yellow River basin.