Hong Kong 'can't afford to miss the boat' on BRI 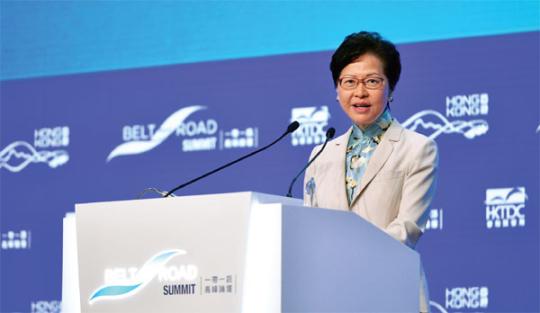 Top mainland and Hong Kong officials threw their support behind the city's push to play an enthusiastic role in the Belt and Road Initiative. That role emphasizes advantages that are expected to enable the Asian financial center to move forward amid social turbulence and geopolitical storms.

"The connectivity and cooperation promoted by the Belt and Road have become increasingly prominent in today's complex social and business environment," Chief Executive of the Hong Kong Special Administrative Region Carrie Lam Cheng Yuet-ngor said at the Belt and Road Summit in Hong Kong on Wednesday.

The two-day event, in its fourth edition, was jointly organized by the HKSAR government and the Hong Kong Trade Development Council. It attracted nearly 5,000 participants and over 80 government officials and business leaders from over 60 countries and regions.

Amid signs of a new era of global protectionism, the visionary and far-reaching BRI will take on new significance, said Xie Feng, commissioner of the Ministry of Foreign Affairs in the SAR.

Citing a World Bank study released in June, Xie said BRI transport projects, if fully implemented, could increase global trade up to 6.2 percent and boost trade for BRI-related economies by as much as 9.7 percent.

"While the concept of BRI comes from China, the outcomes of BRI are shared by the whole globe," said Ning Jizhe, vice-chairman of the National Development and Reform Commission. "Pursuit of a bigger part in the initiative not only gives full play to Hong Kong's impeccable strengths, but also fits in well with what the country truly needs."

By the end of August, the world's second-largest economy had signed 195 BRI-related cooperation agreements with 166 countries and international organizations, said Wang Bingnan, vice-minister of commerce.

"Hong Kong's biggest advantage lies in the 'one country, two systems' principle," said Hao Peng, Party committee secretary and chairman of the State-owned Assets Supervision and Administration Commission of the State Council. "Riding high on the city's open, free market mechanism, Hong Kong has what it takes to join hands with its mainland counterparts to build a community with a shared future."

As Shenzhen charts its course as a demonstration pilot zone for socialism with Chinese characteristics, Hong Kong is well positioned to join forces with its Guangdong province neighbor to gain momentum from the groundbreaking policy, Hao added.

Such a policy, under the Guangdong-Hong Kong-Macao Greater Bay Area plan, reinforces the theme of high-level regional collaboration. "This is part of a whole package of opportunities, and Hong Kong cannot afford to miss the boat," said Gao Yunlong, vice-chairman of the 13th National Committee of the Chinese People's Political Consultative Conference.