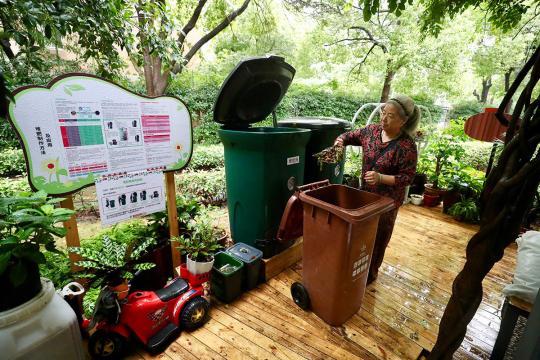 A resident shows how to recycle organic waste and turn it into natural fertilizer and enzymes at Yutai Jingyuan, a neighborhood in Hongkou district, Shanghai, on Aug. 29. (Photo by Zhu Xingxin/China Daily)

A municipal regulation on waste management has shown promise in Shanghai in the past two months, as the city leads China into an era of compulsory garbage sorting and recycling.

Since the regulation took effect on July 1, up to 9,200 metric tons of kitchen garbage have been handled separately per day, an increase of 130 percent from the end of last year, official data has shown.

The city's ability to recycle kitchen waste has improved as well. Up to 4,600 tons of organic garbage is reused per day, and the amount is expected to surge to 5,800 tons by the end of the year.

President Xi Jinping visited a community center in Hongkou district during his two-day inspection in Shanghai on Nov 6 and 7. He stressed that waste sorting is a new fashion and Shanghai should ensure garbage management is done well.