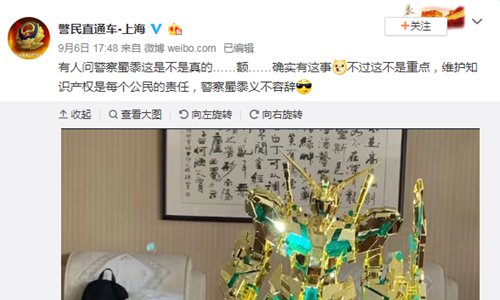 Popular Japanese toymaker Bandai gifted a large gold-plated figurine of one of its warrior characters to the Shanghai police as a token of appreciation after the police busted a 300 million yuan ($42 million) counterfeit case.

The gold-plated Unicorn Gundam scale figure, which is based on a giant robot from its Gundam franchise, is said to be the only one in the world, Pear Video reported on Friday.

The gift came after Shanghai police arrested a group of counterfeit toymakers, discovering more than a million fake toys worth nearly 300 million yuan in August.

Toys from Bandai were among those that were counterfeited.

The Shanghai police said in a Friday Sina Weibo post that while they appreciate the gift, it is their duty to protect intellectual property.