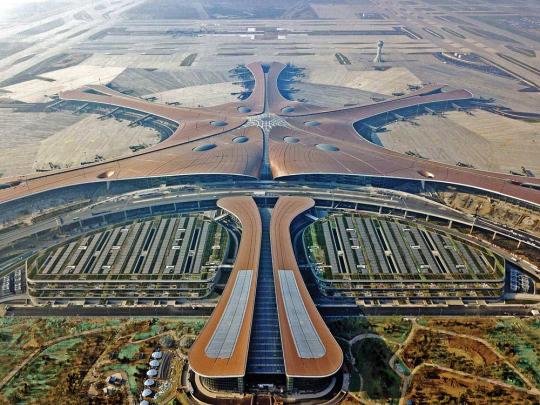 A picture of Beijing Daxing International Airport, taken by drone in August. [Photo/Xinhua]

The utility tunnel is a passage built underground to carry utility lines such as electricity, water and sewer pipes, as well as communication utilities like fiber optics and telephone cables, guaranteeing energy supply to the airport.

According to China Railway 24th Bureau Group Co., Ltd, the utility tunnel at the new airport goes underneath the Beijing-Kowloon Railway.

Compared to similar projects at home and abroad, the construction is quite difficult as it has to guarantee the daily operation of the railway and cannot fall behind schedule.

Engineers from China Railway 24th Bureau Group Co., Ltd and Tongji University jacked a large box culvert under the railway, a trenchless construction method that does not interrupt the traffic above.

With a digitally rendered 3D model for the jacking, engineers adapted the jacking machine to large-span and long-distance construction with precise direction control.

A review committee from China Railway Construction Cooperation Limited said the key technologies of large-span jacking and precision control facilitated the project construction and have reached an internationally advanced level in the field.