Huawei in top place for 5G base station shipments 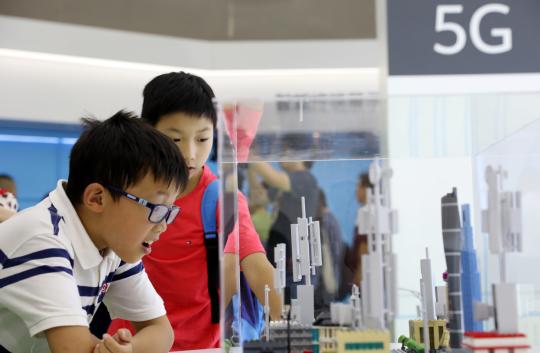 Young visitors look at models of Huawei 5G base stations during an industry expo in Shanghai. [Photo/Xinhua]

Huawei Technologies Co Ltd said on Tuesday that it has shipped more than 200,000 5G base stations worldwide, putting it in a leading role with other global vendors in the superfast technology despite all the restrictions it faces from the United States.

William Xu, Huawei's director of the board and president of the institute of strategic research, said that the company has had more than 200,000 5G base stations in shipment, which marked a steady step forward compared with its earlier announcement of 150,000 base stations in late June.

Xu also noted that the firm has secured over 50 commercial contracts for 5G with carriers globally, among which 28 contracts are from Europe, 11 from the Middle East, six from the Asia-Pacific region, four from the Americas, and one from Africa.

Even though he did not disclose the exact total number, the figure is overwhelming compared with that of major telecom equipment makers. Finland's Nokia said in July that it has obtained 45 commercial orders while the latest public data showed that Swedish telecom manufacturer Ericsson has got 24.

The telecom equipment giant is facing restrictions from the US government which put the Chinese company on an "entity list" in May, banning the Chinese tech company from buying US technologies without special government approval.

Later, the US government gave Huawei a temporary license to purchase some US-made goods to reduce disruption for its customers. In August, it said that it will give Huawei another 90 days to buy from US suppliers.

"Even though we are facing challenges, our businesses remain robust, in 5G particularly. Our first fiscal report shows that Huawei's partners and consumers trust our products and solutions," Xu said on Tuesday.

"Therefore, Huawei is confident and capable of maintaining stable development as well as helping partners to achieve success," he added.

Emphasizing that the firm pursues win-win benefits, Xu disclosed in an interview with China Daily that its Kunpeng chipset and the ecosystem will be open. "Currently, a group of foreign software companies have already supported Kunpeng," he said.

The move also came after the US and Poland signed an agreement on Monday to explore stricter guidelines for companies wishing to be part of the latter's 5G plans. Foreign media said it is aimed at Huawei.

Foreign Ministry spokesman Geng Shuang said in a news briefing on Tuesday that moves that leverage political power to intervene in 5G development and cooperation are detrimental to the 5G progress.

"It also disobeys the principle of fair competition and is inconsistent with the common interests of the international community," he said.