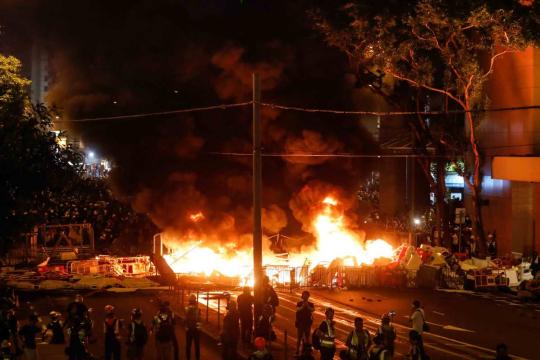 In a statement issued on Sunday morning, the police noted that with the escalating violence and more and more use of lethal weapons by protesters, the safety of police officers and other members of the public was under serious threat.

In the past months, the acts of radical protesters have escalated from blocking main thoroughfares to frequently using lethal weapons, the police said. "The level of violence is rapidly escalating and their illegal acts have no regard to the laws of Hong Kong."

The police pledged to continue to resolutely enforce law so as to safeguard the city's safety and bring all lawbreakers to justice.

On Saturday afternoon, crowds of demonstrators staged illegal assemblies in central and western districts of Hong Kong Island in defiance of a police ban. As night fell, their activities turned violent, with some rioters fighting intense skirmishes with the police and setting many makeshift barricades on fire, causing a meter-high wall of flame at the junction of Hennessy Road and Johnston Road, the arteries of Wan Chai. The nearby building's water sprinkling system was activated by the raging blaze.

"The fire was very fierce at one point, posing serious danger to nearby residents," said the police.

Amid the turmoil, multiple MTR stations along Island Line, Tsuen Wan Line and Kwun Tong Line were attacked to varying extents and five railway lines were forced to suspend their services last night.

Besides massive damages to station facilities, the mobsters also defaced the buildings with graffiti and harassed MTR staff.

In a statement issued on Sunday, the MTR Corporation strongly condemned the malicious acts.

During Saturday's mayhem, a group of radicals, after being dispersed by police, harassed and assaulted passengers onboard a train by throwing umbrellas and hurling unknown liquid at them at Prince Edward MTR station.

Following that, police arrested more than 40 radicals on suspicion of taking part in an unauthorized assembly, criminal damage and obstructing police officers' execution of duties.

Another 11 mobsters were arrested in Causeway Bay and Sai Wan on suspicion of possessing offensive weapon.

According to the Hospital Authority, at least 21 injured were sent to hospitals during Saturday's clashes. Five of them remain in serious condition.