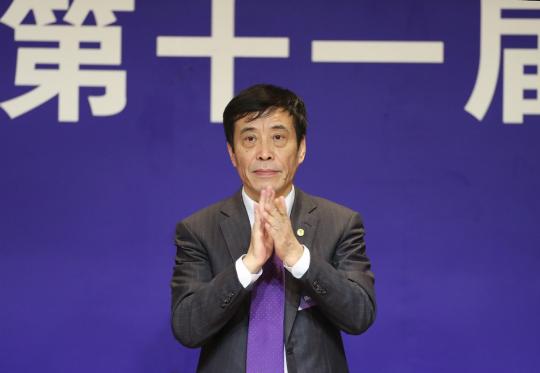 Chen Xuyuan is elected president of the Chinese Football Association at the CFA's 11th membership conference at the Xianghe national soccer training center in Hebei province on Aug 22, 2019. (Photo/Xinhua)

"We will make full efforts to make our men's team the leading contingent in Asia and develop our women's team into one of the best in the world," Chen said on Thursday at the CFA's 11th membership conference at the Xianghe national soccer training center in Hebei province.

"To achieve those goals, the CFA will further deepen institutional reform in both professional leagues and youth development."

As the former chairman of Shanghai International Port Group, which owns Chinese Super League defending champion Shanghai SIPG, the 63-year-old Chen shoulders high expectations from the public thanks to his experience and expertise.

"I feel a great responsibility on my shoulders and I will try my best to live up to the public's expectations regarding Chinese soccer development," he said.

With the short-term aim of qualifying for the 2022 FIFA World Cup and a long-term goal of transforming China into a soccer powerhouse by 2050, Chen knows it won't be easy.

"There's also a gap between the national teams' performances and people's expectations. The men's team has failed to qualify for the past four World Cup finals. On the women's side, although the 'Steel Roses' have shown steady improvement, they failed to make the quarterfinals of this year's Women's World Cup in France."

Chen said the CSL should operate as an independent and market-oriented corporation like the Premier League in England and Spain's La Liga, in which member clubs act as shareholders. The CFA would then no longer be involved in the day-to-day operation of the league, instead functioning as a supervisory body.

Just one day before Chen's election, the CFA confirmed that Brazil-born forward Elkeson has been called up to become the national team's first naturalized player without Chinese heritage.

Chen is cautious about the naturalization effort.

"Naturalized players can be helpful in order to achieve the short-term goal. It doesn't mean we will naturalize a lot of foreign players－the numbers will be very limited," he said.

"We will make sure naturalized players are the minority in the Chinese Super League and on the national team.

"All the fans want the national team to qualify for the Qatar World Cup, and if we can naturalize one or two core players, the possibility of qualifying will increase.

"My priority is to find a sustainable path which is in line with the development of modern football and can be adapted to the current condition of Chinese football."

Du, 59, serves as a deputy minister of the General Administration of Sport of China, and is also a FIFA council member and AFC Referees Committee chairman.

Gao, 53, is a former Chinese international player who served as the head coach of the national team from 2009-11 and again in 2016.

Sun, 46, was captain of the Chinese women's national team and voted FIFA Female Player of the Century in 2000.

She now serves as director of the women's youth training department of the CFA.