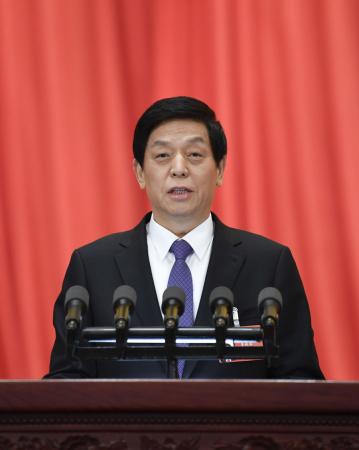 Li Zhanshu will follow in footsteps of president, premier in strengthening ties

China's top legislator Li Zhanshu will kick off his European tour on Wednesday, making him the third Chinese leader to choose the continent as his first destination for an overseas trip this year.

The 10-day trip will take Li, chairman of the Standing Committee of the National People's Congress, to Norway, Austria and Hungary. It follows the visits of President Xi Jinping in March and Premier Li Keqiang last month.

Xi's European tour took him to Italy, Monaco and France, while Li traveled to Brussels and Croatia.

"It fully demonstrates the importance China attaches to Europe in foreign affairs and reflects the close interaction and growing momentum for cooperation between the two sides," Foreign Ministry spokesman Geng Shuang said on Tuesday.

Relations between China and Europe, two of the world's major powers, markets and civilizations, have become stable, mutually beneficial and strategic, Geng said.

China and Europe both support multilateralism and uphold the basic norms of international rules based on the principles of the United Nations Charter, he said.

Citing the complex international landscape, Geng said China and Europe should step up communication and cooperation to advance their partnership－featuring peace, growth, reform and civilization.

They should also jointly deal with global challenges and serve as stabilizing forces in the world, he said.

Cui Hongjian, director of the Department for European Studies at the China Institute of International Studies, said China-Europe ties are at an important stage. Frequent visits by Chinese leaders to Europe illustrate the solid foundation of the relations, Cui said.

He added that exchanges between the two sides are broad, ranging from the administrative to legislative levels and from the governmental to societal levels.

"As the two sides face common challenges, there is an increasing need for them to strengthen cooperation in various areas," he said, adding that their common position to uphold multilateralism and strengthen trade cooperation has become more clear.

They also need to respect each other during their own reform processes, and make bilateral cooperation a way to serve self interest while providing support to the other side, he said.