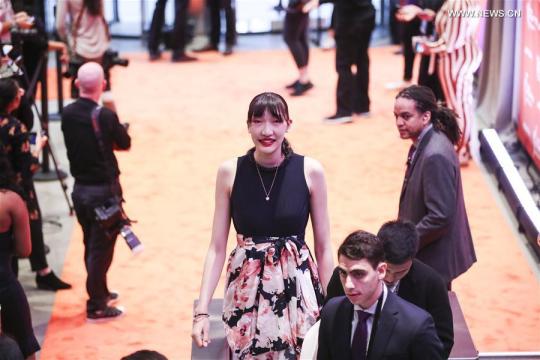 Meanwhile, 20-year-old Li provides a different style for Team China and potentially Atlanta as her size－6-foot-7, 227 pounds－and shooting ability represent untapped potential to bang in the paint with the WNBA's best.

Li, who plays for Guangdong and was named MVP of the WCBA finals this season, said ahead of the draft she would not compete in the WNBA any time soon, focusing instead on honing her game in the domestic league while helping China qualify for the 2020 Tokyo Olympics.

According to a Tencent report on Thursday, the four-time WNBA champion Minnesota Lynx offered a contract to Chinese forward Li Meng, a member of WCBA runner-up Bayi, following a tryout camp.

Xu Limin, head coach of the national team, encourages the younger generation to dream big and work hard to trigger another Chinese surge in the WNBA. 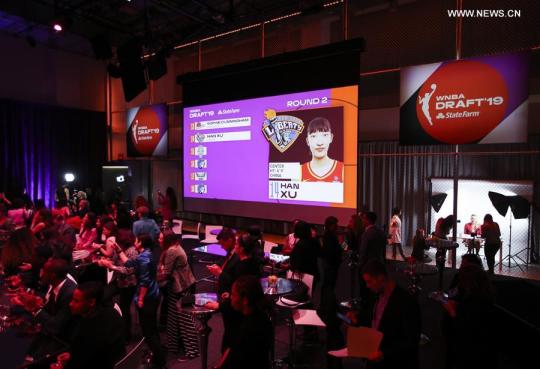 The screen shows Han Xu of China is selected by the New York Liberty in the second round of the WNBA women's basketball draft in New York, US, April 10, 2019. （Photo/Xinhua）

"Having two players drafted by the league in one year is an honor for us and a testament to their individual efforts and collectively the improvement of Chinese women," Xu said on Thursday.

"For Han there for sure will be a lot of challenges, physically and culture-wise, to adapt to the WNBA ... but I have strong faith in her potential. I believe she can survive in the league and be a standout."

Bolstered by a young core that included Han and Li Yueru, Team China finished sixth at the World Cup last year, tying its best result since 1994, when it was runner-up at the world championships.

Cheryl Reeve, head coach of the Lynx who was an assistant for the 2018 US team, was impressed with Han and other Chinese players.

"I think the talent level of Chinese players is increasing," she told Associated Press. "They're very young with some serious upside, and again, just having seen them on the national team, the WNBA is a league that I think they could be comfortable in if they get the opportunity."