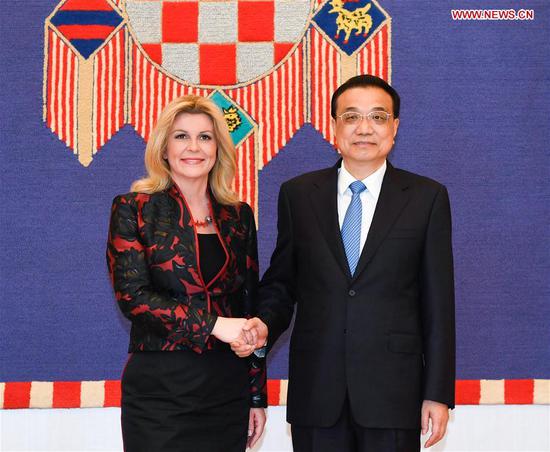 Chinese Premier Li Keqiang said on Wednesday that China will insist on open tendering when carrying out infrastructure cooperation with European Union (EU) member states and will abide by the EU standards and rules.

Li made the remarks during his meeting with Croatian President Kolinda Grabar-Kitarovic, to whom the Chinese premier first extended the greetings from Chinese President Xi Jinping.

On infrastructure cooperation, Li said that China will ensure projects being completed with high quality, and strive for mutual benefits, win-win and all-win cooperation in this area.

An important consensus reached in the just-concluded 21st China-EU leaders' meeting is that investment should be open to both sides and non-discriminative, which the China-EU cooperation should comply with, he added.

Li said that China and Croatia always stick to treating each other equally with mutual respect based on mutual benefits and win-win principles, and the bilateral relations have maintained healthy and stable development.

Noting that China-Croatia cooperation is equal, open, inclusive and has huge development potential, Li said China is willing to strengthen the alignment of the Belt and Road Initiative (BRI) with Croatia's Three Seas Initiative (TSI), and continuously deepen bilateral practical cooperation in all areas.

The two countries have no conflict of interests and have broad prospect for cooperation in areas including economy and trade, investment and culture, she added.

Grabar-Kitarovic said that Li's visit has achieved fruitful results and injected new impetus into the development of China-Croatia relationship.

Croatia welcomes Chinese companies to invest in the country and carry out port cooperation, among others, said Grabar-Kitarovic, adding that Croatia will not discriminate any state enterprise.

Grabar-Kitarovic said the project of the Peljesac Bridge is a symbol of friendship between people of the two countries, and it is a large-scale infrastructure project constructed in an EU country by a Chinese company through open tendering and in compliance with EU laws and standards.

The project will bring a huge convenience to local people, said the president, adding that it has shown the capabilities of Chinese enterprises, set up a new model for bilateral cooperation and is expected to deliver positive demonstration effect.

Croatia is willing to better align the TSI with the China-proposed BRI as well as the cooperation mechanism between China and Central Eastern European Countries (CEEC) to promote Croatia-China and Europe-China practical cooperation to achieve new development, she said.