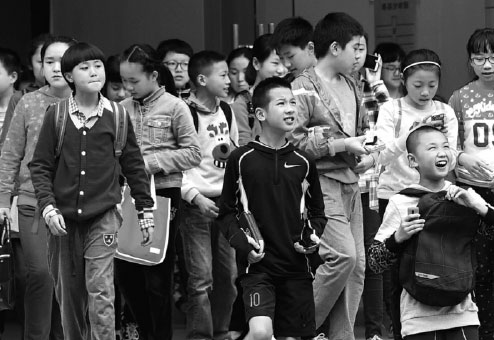 The popularity of after-school coaching in math, which taps parental anxieties that children will fall behind academically, provides an opportunity to compare the concepts and methods of math education between China and other countries.

Yang Le, a mathematician and an academician with the Chinese Academy of Sciences, said, "The extracurricular Olympic mathematics coaching for primary school students is more like 'mathematical acrobatics', and does not help develop real mathematical thinking. High school is the ideal stage on which to arouse young people's interest in math."

Shing-Tung Yau, a Chinese-American mathematician, told media outlets the crux of math education does not hinge on how many IMO medals a country wins, but on whether students have developed their interest and independent thinking on the subject. He fears that math contests are "strangling genius".

Zuming Feng, who used to instruct the Chinese IMO team and now coaches the United States squad and is a math instructor at the Phillips Exeter Academy in New Hampshire, compared the differences in mathematical education in China and the U.S..

He said most Chinese children are used to waiting for teachers to give them the formula to solve problems. They do not like creating their own solutions, and usually do not know how to deal with new problems without formulas.

"I have seen too many Chinese students score high marks in exams but who are weak when it comes to solving problems. There are also some 'quasi-geniuses' who can come up with simpler and better solutions to even difficult IMO questions than the standard answers, because they have not been institutionalized by the exam-oriented educational system," Feng said.

He advocates engaging students in problem-solving math activities to arouse their interest and encourage them to seek solutions independently, enabling them to develop as "critical thinkers of tomorrow's problems".

Po-Shen Loh, professor of mathematics at Carnegie Mellon University in Pittsburgh, Pennsylvania, and a coach of the U.S. IMO team, told China Youth Daily that the different math teaching methods in China and the U.S. stem from cultural differences.

"In the U.S., there are no unified enrollment exams for middle school and university ... so the education focuses more on exercising students' thinking ability."

The exam-oriented math teaching method in China requires students to do exercises covering all knowledge points continuously, until they are fully proficient.

To obtain an advantage over their peers in competitive enrollment exams, many students attend extracurricular classes, and it is common to see pupils in middle schools or even primary schools studying advanced mathematics for college students.

Yang, from the 21st Century Education Research Institute, urged Chinese parents to reflect on their "blind confidence" in students' advantages in math over their Western counterparts. He said such advantages can only be seen at primary and middle schools, and come at great cost, as they deprive students of the initiative to look for solutions independently.

"It is a pity that many children lose their interest in math at an early age because of jumping the gun by attending coaching sessions. Even gifted students who can handle the IMO have 'lost their originality' to the modularized coaching system," Yang said.