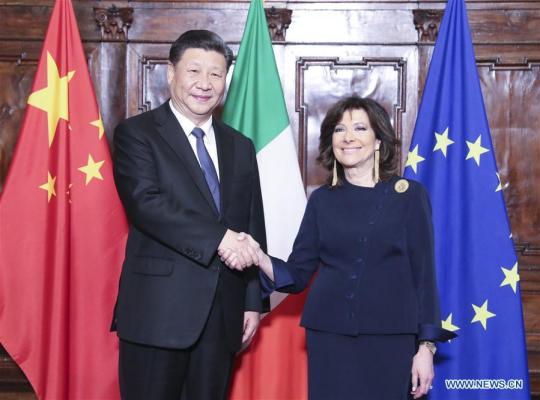 China and Italy have enjoyed a traditional friendship, with the ancient Silk Road closely linking the two peoples, Xi said.

Since they established diplomatic relations nearly 50 years ago, the China-Italy ties have seen healthy and stable development, and the two countries have become important partners who trust each other and work together, Xi said.

The visit is meant to consolidate the stability and strategic nature of the China-Italy relations in the long term, and comprehensively elevate the level of their mutually beneficial cooperation, Xi said.

The Chinese president stressed that in recent years, China's National People's Congress and the Italian Senate have established a regular exchange mechanism.

China supports the two countries' legislative bodies to carry out multi-level, wide-ranging and multi-channel exchanges and cooperation, and share successful experience on major issues such as legislative supervision, state governing, national economy and the people's livelihood, on the basis of mutual respect and mutual learning, Xi said.

He said he hopes that the Italian Senate will continue to play an active facilitating role, and create better conditions for and inject greater momentum into the development of bilateral relations.

The Italian Senate warmly welcomes Xi for his visit, Casellati said, noting that the Italian and Chinese peoples have always trusted each other and maintained profound friendship, with close ties in such fields as economy and trade, and culture.

The Senate speaker said she agrees with Xi on his remarks about the traditional friendly exchanges between the two countries dating back over 2,000 years, published in leading Italian newspaper Corriere della Sera ahead of his visit.

China and Italy are major countries that boast a rich culture, she said, adding that Italy is willing to boost communication and cooperation with the Chinese side in such fields as culture, art, language, heritage protection, tourism, science and technology, and innovation, and encourage their youths to increase exchanges and mutual understanding.

The Italian side looks forward to enhancing cooperation with China on jointly building the Belt and Road, She said.

Noting that the history of Italy-China exchanges for the past 50 years has been a history of dialogue and friendship, the speaker said the Italian Senate is willing to facilitate exchanges between the two countries' legislative institutions, and continue to make contributions to deepening Italy-China friendly cooperation.

Xi arrived in Rome Thursday for a state visit to Italy, the first stop of his three-nation Europe tour, which will also take him to Monaco and France.