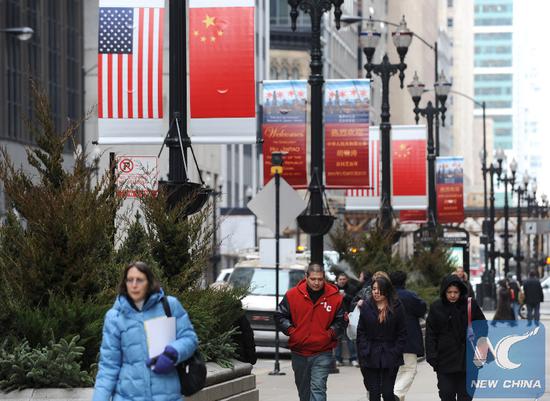 The fast-growing U.S. oil and natural gas industry, which is seeking export markets around the globe, are overshadowed as sticky trade tensions have added uncertainty and costs to U.S. businesses.

Still, the economic complementarity between the two sides remains strong despite trade policies and tariffs announced in 2018.

The downstream impacts of trade barriers are very real, said Susan Schwab, professor with the University of Maryland and former U.S. trade representative on Friday at a panel discussion.

"We see them in our economy today. Interconnectedness of economy is very real. There's a lot of evidence," Schwab added.

The trade tensions between China and the United States have impacted the trade flows of LNG, said Matthew Shruhan, senior analyst on global LNG with international consultancy firm IHS Markit.

But these long-term LNG projects last for 20 or 30 plus years. The real impact on date has been a kind of long-term contract in front, said Shruhan on Thursday at another panel discussion.

"We haven't seen really any Chinese buyers (who have) contacted the U.S. LNG project developers since the tensions hiked," Shruhan said.

"When you take a trade action, you are going to perhaps create leverage for yourself, but you're also likely to be having an impact on your own domestic economic interest," said Schwab.

The proposed Alaska LNG exporting project is one of the U.S. LNG projects impacted by the bilateral trade tensions, said an anonymous industry insider.

"A lot of projects are looking to sell into China like Alaska LNG project. Cheniere Energy has long-term contracts with Chinese customers and then a lot of the proposed projects also want to sell LNG to China," said the source.

In November 2017, the State of Alaska, the AGDC, Sinopec, the Bank of China and the China Investment Corporation signed a five-party agreement to advance Alaska's LNG export project with a total investment of 43 billion U.S. dollars.

The AGDC is having conversations with individuals and officials in China, other Asian countries as well as producers and potential investors, said Mike Dunleavy, Governor of Alaska.

China is the second largest oil refining market and the United States has the largest unconventional oil coming to the market. So, you would need to find a way for some of the U.S. crude oil to go to China, according to Roger Diwan, vice president of financial services and energy with IHS Markit.

"Because of the trade tensions, China has stopped buying U.S. crude oil. If U.S. crude oil output continues to add another 1 million to 1.5 million barrels and the Chinese market is closed, that would create more relocation of crude oil in physical market," said Diwan.

Schwab said, "Speaking as an economist, trade was bad and trade barriers are bad. You have a situation where trade barriers by definition hurt everyone and consumers, (but) may benefit a few."

"Trade policy has a limited role to play when it comes to trade deficits," Schwab added.

"If the trade negotiations are not resolved, it not only has a sentiment on demand, but also has a direct impact on the physical flow of crude oil," Diwan said.

The U.S. energy industry has been going through revolutionary changes in the past decade, with increasing productions of both crude oil and natural gas, said Hou Qijun, vice president of the China National Petroleum Cooperation.

On the other hand, China has become the world's largest oil importer in 2017 and also one of the largest natural gas importers in 2018. "Naturally, a large energy producing country and a large energy consuming country are complimentary," Hou said at the CERAWeek.

Hou noted that China's increasing imports of U.S. energy can improve the trade structures of both countries, reduce trade deficit and diversify the energy import source of China.

"There may be some challenges now, but economic facts are stubborn. I would expect that sooner or later U.S. LNG exporters and Chinese LNG importers will meet, which would be beneficial for both of the countries and for the global energy markets," Fatih Birol, executive director of the IEA Tuesday said in an interview with Xinhua on the sidelines of the CERAWeek conference.

The emerging of the United States as a major energy exporter would bring more options and diversifications for energy importers such as China, said Birol.

More LNG exports from the United States would make the hand of gas importers stronger and bring more flexibility to the market, Birol added.

"It is becoming more of a buyers' market and it would be a good time for LNG importers such as China," Birol said.

The United States would contribute 75 percent of incremental LNG supply in the world in the coming few years, said Birol.