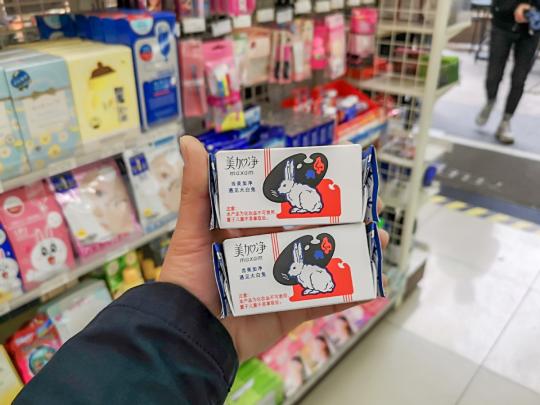 Lip balms that look and taste like White Rabbit creamy candy on sale in a supermarket in Shanghai. (Photo provided to China Daily)

Crossover retail or brands building cooperation with each other for new products is the new buzzword for companies looking to gain an edge in China's rapidly changing retail marketplace.

New crossover products that have made waves recently include a creamy candy shaped lip balm infused with White Rabbit creamy candy, a bottle of pink perfume jointly developed by baijiu maker Luzhou Laojiao, and a paprika lipstick from fast food chain Zhouheiya whose signature product is spicy duck necks. The lipsticks launched by US soft drink brand Coca-Cola and South Korean makeup brand Face Shop have the smell of Coca-Cola.

"There is definitely a broader trend toward brand collaboration happening globally and especially in China," said Ben Cavender, principal of Shanghai-based China Market Research Group (CMR). It allows brands to connect with a broader group of consumers and imbibes a feeling of nostalgia, he said.

Millennials, or those people born after 1980, have been the face of the crossover shopping. For many like Dong Biyong, a millennial shopper, the crossover products are fond remembrances of her childhood. "I was extremely upset after I failed to get the creamy lip balm on the debut day, but luckily enough could get some later," said Dong.

She was referring to the lip balm launched by White Rabbit creamy candy and Maxam, a brand owned by cosmetics maker Shanghai Jahwa.

"The first 920 pieces for presale on Maxam's flagship store in Tmall were snapped up within one second on Sept 20 last year. An additional 10,000 sets were sold out within three hours on the following day," said Shen Qinfeng, marketing manager of Shanghai Guan Sheng Yuan Food Co Ltd.

According to Shen, at least 300,000 pieces have been sold so far, including through brick-and-mortar stores.

Beauty and personal care sector in itself has remained solid in sales, as it is a category where consumers tend to indulge themselves even when they are going slow on bigger purchases, said Cavender from CMR.

The high profit margin of the sector has also attracted other brands from the food industry. Last December, nearly 1,000 limited edition makeup palettes were sold in less than half an hour by one of China's largest beverage companies Hangzhou Wahaha Group, China News Service reported.

The market research firm expects the value of the beauty and personal care sector in China to reach 408.6 billion yuan this year, and 475.6 billion yuan by 2022.

CMR's Cavender said the crossover trend has not necessarily been just with cosmetics, but also with apparel brands. An example in this regard is the streetwear brand Supreme doing collaborations with Louis Vuitton.

Regardless of the specific crossover product category, analysts suggest there are challenges for brands in seeking an alternative product other than their specialty.

"Quite a few crossover products have been launched. But not all of them can be termed successful," said Jin Qiaoying, research director of the beauty and personal care sector at Mintel China.

"Part of the challenge is in making the product meaningful to consumers," said Cavender.

If consumers don't have affection for both brands they are unlikely to buy, so there has to be good brand synergy and retailers need to understand their target customer well, he added.

"Consumers are becoming wiser and they need strong reasons (product advantage) for the purchase," said Jin.

Shen attributed the unexpected purchase fever from consumers for the creamy lip balm to the innovative collaboration between Maxam and White Rabbit.

"Since January 2018, the Maxam team spent lots of time and effort in planning, research and development, trying to get the ideal flavor and formula," said Li Chenkun, senior brand manager of Shanghai Jahwa.

According to Li, whilst offering a nostalgia of the White Rabbit creamy candy, the lip balm strives to strike a balance between moisturizing function and flavor in accordance with consumer preferences.

"I like it a lot not only because of childhood memories that the appearance and creamy scent brought, but also because it is easy to use," said Dong.

The White Rabbit candy, with a soft, chewy texture, is in the form of a cylinder of about 3 cm long and 1 cm in diameter. There used to be a saying that seven White Rabbit candies are equivalent to one cup of milk, which indicates that one of the nation's most popular candies was also seen as a nutritional product.

But the fierce competition from both domestic and international counterparts have forced the traditional brand to seek innovation and crossover collaboration.

Since 2015, White Rabbit has launched a slew of collaborative products with global partners including Agnes b, the National Museum of China and Pacific Coffee, added Shen.