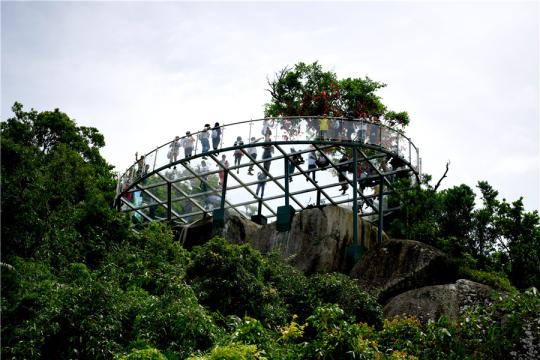 Visitors stand at a glass platform in forest park in Sanya, Hainan province. [Photo by Sha Xiaofeng / For China Daily]

According to the government work report Shen delivered to the Hainan Provincial People's Congress, which opened its annual session on Sunday, Hainan's GDP reached 483.2 billion yuan ($71.6 billion) in 2018.

The 5.8 percent growth rate falls short of the 7 percent target Hainan set for last year, but officials said it lies well within their expectations after the local government "took a decisive move" to tame an overheating real estate sector.

Despite last year's slowdown, the tropical province is aiming for 7 to 7.5 percent GDP growth in 2019, Shen said.

Fu Xuanchao, director of Hainan Provincial Development and Reform Commission, said a decline in real estate investment, which has long been the driving force of Hainan's economic growth, was the main cause of the lower GDP growth.

The province's property investment dropped by 16.5 percent in 2018, and the square meters of housing sold declined by 37.5 percent, according to the Hainan Provincial Bureau of Statistics.

Fu said the government took "decisive actions" to rein in the property market so as to pursue high-quality development.

Meanwhile, the province is working to accelerate the development of its free trade zone.

Central authorities introduced duty-free shopping in Hainan in April 2011 to help develop China's southernmost island province into a world-class tourist destination by 2020. The policy has been adapted five times since, with broader coverage of shopping items and fewer restrictions.

Two new duty-free shops were opened on January 18, in Haikou and Boao, making four such shops in Hainan. The other two are at Haikou Meilan International Airport and the resort city of Sanya, on the southern tip of the island. The latter, at 12,000 square meters, is the world's largest duty-free shop.

In December, the duty-free shopping limit was eased from 5,000 yuan to 30,000 yuan. In addition, the categories of duty-free goods were expanded from 18 to 38, all purchased by China Duty-Free Group from the countries of origin. All passengers who leave the island by air, train or ship are eligible for duty-free shopping.

From 2011 through 2018, more than 12.73 million tourists purchased 40.7 billion yuan worth of duty-free products in Hainan, said Wang Huiping, director of Hainan Provincial Department of Finance.

China announced in April that all of the Hainan island will become a pilot free trade zone, and the central government granted the island much more autonomy than the other 11 FTZs, making it a standard-bearer for national reform.

Sun Dahai, deputy secretary-general of the Communist Party of China Hainan Provincial Committee, said the central government has issued seven plans to support the construction of the Hainan FTZ.