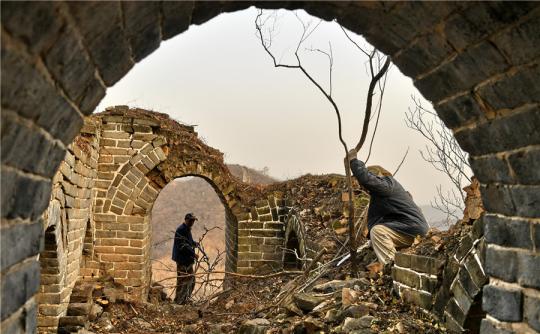 Nearby villagers remove weeds and tree branches from a section of the Great Wall in Beijing in November. (Photo/Xinhua)

Authorities said "excessive restoration" of the Great Wall will be avoided in the future to help preserve its historical integrity.

Song Xinchao, deputy director of the National Cultural Heritage Administration, was replying to a question from China Daily at a news conference in Beijing on Thursday.

Thirteen years in the making, the national-level Great Wall comprehensive conservation plan was released by the administration and the Ministry of Culture and Tourism on Tuesday. It will be used to guide restoration, management of public access and academic research until 2035.

"Many people have biased understandings," Song said. "They confuse restoration of the wall with development of a tourist attraction."

He said that restorations of the main structures are often not differentiated from general construction work.

"Many restorers have stereotyped ideas that every section of the Great Wall should be like Badaling in Beijing," he said. "That leads to many problems."

In 2015, restoration of a section of the Great Wall in Suizhong county, Liaoning province, aroused widespread anger online after portions were paved over with cement, destroying its original facade.

A collapsed gate along the Great Wall in Shanyin county, Shanxi province, was worked on in 2017, but it was widely criticized for its unattractive appearance.

In the new plan, the principle of minimum intervention is emphasized.

"For those portions that have become ruins, the priority is to avoid or slow down their disappearance. Massive restoration is not suitable in such cases," the document said.

The cultural heritage administration organized a nationwide survey of the Great Wall from 2006 to 2010, and a digital database of the structure was created in 2015. The comprehensive conservation plan was approved by the State Council earlier this month.

According to the survey, more than 21,000 kilometers of the Great Wall survive in 15 provincial-level administrative regions across China. This includes 8,800 km built during the Ming Dynasty (1368-1644), with the most familiar sections to tourists constructed with bricks.

However, in earlier dynasties, earth and stone were major building materials. In some western provinces, portions were even constructed by mixing sand and vegetation.

"We will enhance the expertise among restorers, though no uniform standards for fixing the Great Wall should be set. However, more scientific guidance is needed to encourage each section to use standards based on its own characteristics and materials," Song said.

Liu Yuzhu, director of the administration, said the Great Wall is not only an architectural wonder but also a landmark that promotes national pride.

For example, Chinese soldiers fought Japanese forces in 1933 along the Great Wall near Beijing.

"The Great Wall is deeply rooted in Chinese people's hearts as a form of spiritual strength," Liu said. "In the new conservation plan, nongovernmental efforts are encouraged to organize more protection for the structure and promote educational programs."

Liu said that about 100 million yuan ($14.7 million) has been allocated annually to protect the Great Wall in recent years, and most funds have been spent on key sections. But many local patrols overseeing the structure still lack sufficient financial support.

"Now that the conservation plan has been released, local governments can put more emphasis on the work," Liu said.

Beijing has set an example by including payment for patrols made up of local residents. There are more than 3,000 such patrols registered nationwide.

The Great Wall was named a UNESCO World Heritage Site in 1987, one of the earliest in China to achieve the honor.

The China Foundation for Cultural Heritage Conservation joined hands with US technology giant Intel in 2018 to use artificial intelligence and aerial drones to monitor sections of the Great Wall near Beijing and help facilitate future restoration work.

Research institutes from China and the United Kingdom have also been holding regular symposiums since 2017 to improve protection of the Great Wall, as well as Hadrian's Wall, which was built by the Romans in northern England.