Kenya on high alert after terrorist attack put down 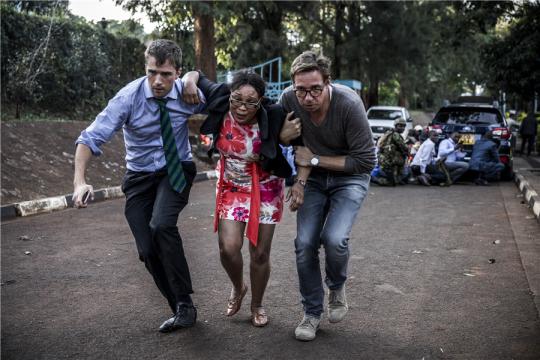 People flee a commercial complex in Nairobi, Kenya, on Tuesday during an attack by extremists. (Photo/Agencies)

All terrorists involved were killed in the 19-hour ordeal that also took the lives of the 14 civilians, Kenyatta said in a television speech on Wednesday. More than 700 people were rescued.

Earlier reports said 11 Kenyans, a U.S. citizen and a Briton were among the casualties.

Extremists struck 14 Riverside Drive at about 3.30 pm Tuesday and forcibly entered the business complex that houses DusitD2, a five-star hotel of the Bangkok-based hotel and resort chain Dusit International.

Al-Shabab, the extremist group allied with al-Qaida and based in neighboring Somali, claimed responsibility for the carnage.

Kenyatta said: "We are governed by laws, rules and regulations and embrace peaceful coexistence in the face of adversity. We are also a nation that never forgets those who hurt our children."

While commending the security response to the incident, Kenyatta assured Kenyans and foreign visitors of their safety. "We have invested heavily in our security systems and this was evident (on Tuesday). We have shown our enemies and the world that we are ready to deal with any threat to our country."

The president said that Kenya will not take security for granted and continues to be on high alert. Continued efforts will be made to make the country inhospitable to terrorists, and operations are taking place within and outside the country to defeat terrorism.

"We are in the process of building a new, prosperous, secure and inclusive nation that will allow everyone to thrive. No one will derail our efforts, and no one should doubt our resolve."

Robert Otieno, an analyst based in Nairobi, said the quick security response was commendable and saved hundreds of lives. He called the attack consistent with the operations of al-Shabab.

The attack closely resembled the assault in September 2013 on the Westgate Shopping Mall, an upscale center in Nairobi. At least 67 people were killed in the incident. In 2015, another al-Shabab attack killed 148 people at a university in Garissa, eastern Kenya,

The DusitD2 attack came a day after a Kenyan court ruled that three of the four suspects accused of the Westgate mall attack must stand trial. One was released due to insufficient evidence.

The three have been charged with conspiracy to commit terrorist acts, aiding terrorists and being in possession of materials linked to al-Shabab.