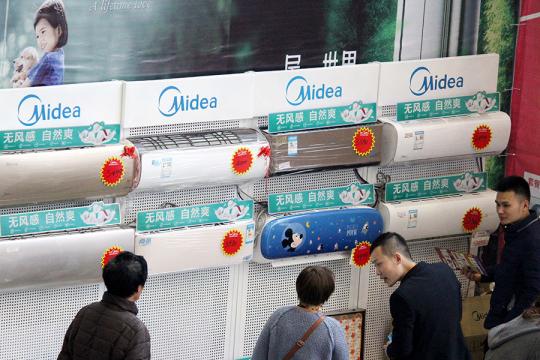 Consumers check out Midea's air conditioners at a mall in Shangzhou, Jiangsu province, on Nov 23. Midea said on Nov 21 it will acquire consumer electronics firm Little Swan.（Photo by Wang Qiming / for China Daily)

The China Securities Regulatory Commission (CSRC) is working toward quicker approvals of applications for mergers and acquisitions or M&As.

The CSRC has unveiled a range of policies loosening restrictions on M&A applications. It has also gradually eased control over M&As that have implications for the capital market.

In October, it eased funding restrictions on M&A's involving listed companies. It now allows them to use funds raised for acquisitions to supplement operating capital or repay debts of themselves or acquisition targets.

The regulator also said it would improve supervision to support shareholders and strengthen their control through investment in share placements.

It has also introduced a fast-track procedure to review small M&A deals that do not involve major asset restructuring, which saves much time for such deals.

Analysts said the new regulations will facilitate M&A involving listed companies, and will improve quality of listed companies, shore up the structural upgrade of the economy, and contribute to the healthy development of the real economy.

"The authorities sometimes tighten grip on market regulation, and sometimes, as it is now, loosen restrictions," said Song Guoliang, professor of finance at the University of International Business and Economics in Beijing.

"Such moves are all out of a rational response to the overall economic situation, and will have positive impact on increasing market vitality."

Now is a good time for capable companies to go in for M&A activity, as many worthy targets that were not willing to be sold in the past, are now on the market at reasonable prices, Song said, who is also director of the financial products and investment research center at the UIBE.

Besides, when market resources are at a relatively low price, it is a good time for unlisted companies to take over listed shell companies and initiate M&A on the A-share market, he said, adding the regulator's easing of policies will further boost the influence of market mechanisms, and increase their efficiency as well.

CSRC data showed M&A activities on the capital market have been bolstered in recent months.

The domestic market had booked nearly 3,000 M&A deals involving listed companies in the first nine months of last year, up 69.5 percent year-on-year and exceeding the total amount of M&A deals last year, according to the CSRC.

The transactions were valued at nearly 1.8 trillion yuan ($262 billion), up 46 percent year-on-year, and close to the full-year M&A transaction value last year.

Moreover, among all the M&A's in the first three quarters, only 117 needed regulatory approvals from the CSRC, which means the proportion of M&As that needed review and approval from the regulator has dropped further to 4 percent from about 10 percent in 2017.

According to Wind Info, a financial information provider, the CSRC reviewed 30 M&A applications from Oct 1 to Nov 20 last year, among which 27 were permitted.

The CSRC had given the green light to 94 M&A applications by Nov 20 last year, out of a total of 107 applications the regulator reviewed. The approval rate stood at nearly 88 percent, according to Wind Info.

Fast M&A approval from the CSRC is also in line with China's national goals such as supply-side reform, overcapacity cuts, and upgrade of economic structure, Song said.

The implementation of such national strategies relies on reallocation of market resources, for which M&A is a good means, he said.

Through M&A, capable companies not only access finance, but more importantly, are able to reorganize assets and resources to achieve high growth, and eventually become international players, he said.

Chinese companies that are industry leaders have an increasing need to allocate resources and assets on a global level, and quick M&A approvals, especially removal of unnecessary administrative procedures, will help safeguard business secrets, and facilitate the implementation of international strategies, Song said.

Besides, the development history of big companies both home and abroad shows that big companies' M&As involving smaller ones often inject new growth momentum into merged entities, and lifts the whole economy's innovation, because innovation often happens in small-to-medium businesses.