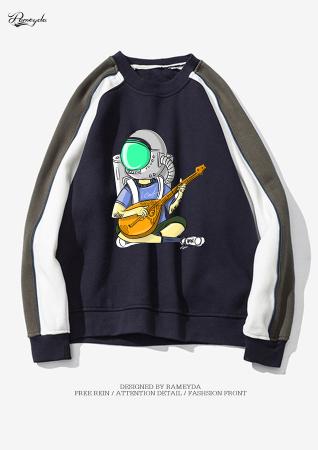 A Rameyda shirt features a Kazak musical instrument, the dombra, being played by a figure in a diver's helmet. (Photo/China Daily)

Two friends who started a clothing and accessories brand in the Xinjiang Uygur autonomous region have hit it big by giving traditional patterns a modern twist.

Hip-hop lovers Wei Xiaojiang and Muradil Muhtar teamed up in 2015, and their Rameyda line of products, including T-shirts, hoodies, caps and bags, is helping preserve ethnic culture by promoting it among young people.

One of their earliest and most iconic designs is a modern take on the kanway, a traditional short-sleeved shirt worn by Uygur men and women featuring colorful embroidery on the neck, chest and arms.

"We want to make it a cool thing to wear kanway," Wei said. "People only tend to wear it during traditional festivals, so we designed a T-shirt that mixes classic patterns with modern style, hoping young people will be more willing to wear it in their daily lives."

Written on the sleeve of the black T-shirt is "Dopeway", a combination of the word "dope" (slang for good or fashionable) and "kanway". The design also features a goat's head, a common food eaten by Uygur people.

"Xinjiang has many interesting and cool things in terms of ethnic culture - music, clothes and nature," Muradil said. "It's our pride, and we want to promote Xinjiang culture in our designs."

Another popular product is a cap emblazoned with "65", the two digits at the start of Xinjiang residents' ID numbers.

"Behind each design, there is a story," Wei said. "The design inspiration is mainly from our life experience."

Wei, a high school dropout, was working as a gym manager in Urumqi, the regional capital, when he and graphic designer Muradil decided to branch out on their own in May 2015.

At first they provided design services to companies, creating logos, posters and uniforms, which helped them build contacts, particularly in the textiles industry.

The duo produced their first self-branded product in August that year after the demolition of the city's Nanmen Square to make way for a subway station. An underground mall below the square had been a popular hangout for young people.

"The square was a landmark and an important place in our childhood memory," Wei said, adding that to commemorate the event they printed 50 black T-shirts with the word Nanmen and a white triangle, representing the pyramid that once stood on the square. The shirts quickly sold out, which inspired them to do more.

Over the next year, Wei and Muradil released 10 designs - in addition to producing work for other companies - and asked local hip-hop artists to wear them at concerts.

After making a name for themselves, they registered their Rameyda brand as a company in August 2016.

They sold their products, priced from 50 to 150 yuan ($7.28 to $21.84), through WeChat and the Taobao online marketplace, and opened a store in Urumqi last year. Most customers are age 18 to 30, mainly college students, they said. Muradil said young people in Xinjiang like hip-hop culture, and the design style has a good market in the region.

"I'm happy to know that many people in other provinces across China like our designs, too," said Wei, who added that their T-shirts flew off the shelves during an exhibition in Shenzhen, Guangdong province.

The Rameyda team now includes 20 people, allowing the company to focus on organizing events for fans, such as rock climbing and motorbike riding, and activities that promote the protection of wildlife.

"It's difficult for small brands like us to survive in the market, and many have come along and produced some items and then quit," Wei said. "But we're happy that we've kept our business going, although we never seem to make ends meet.

"It's because we always try new ideas and expand. We're getting used to new challenges. The bigger they are, the more excited we feel."