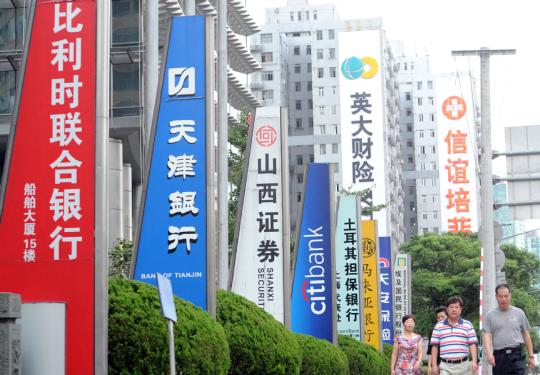 Pedestrians walk by a line of financial institution signs in Lujiazui, a central business district of Shanghai. (Photo by Sha Lang/for China Daily)

Foreign investors are embracing opportunities for business growth in China, thanks to a series of policies aimed at further opening its financial markets.

The country, they expect, will likely take more steps in that direction.

UBS AG announced it has become the first foreign bank to increase its stake to gain majority control of a joint-venture securities brokerage in China－the latest move by a foreign bank in response to a series of policies to further open the Chinese financial markets.

The bank completed the settlement of the transaction on Dec 24, increasing its shareholding in its joint-venture securities brokerage in China, UBS Securities Co Ltd, from 24.99 percent to 51 percent.

Eugene Qian, president of UBS Securities, said: "With majority control, UBS Securities will be able to better leverage its close ties with UBS Group's operations in the region to further take advantage of the wide range of opportunities on offer in China's capital markets, and at the same time make a greater contribution to the UBS Group."

The China Securities Regulatory Commission announced in April 2018 it has increased the limit on foreign investment in securities joint ventures from 49 percent to 51 percent and will remove the cap completely in three years.

In August 2018, the China Banking and Insurance Regulatory Commission also abolished rules that limited foreign investment in domestic banks and financial asset management companies. Previously, the caps on foreign holdings in such financial institutions were 20 percent for a single overseas institution and 25 percent for group investors.

"As a result of policy easing, foreign banks may increase their stake in small and medium-sized Chinese banks. They may also form financial holding companies to conduct business across different fields of the financial sector," said Xiong Qiyue, banking analyst at the Institute of International Finance at Bank of China Ltd.

Mark Leung, JP Morgan China CEO, said: "JP Morgan and many of our clients welcome the unprecedented Chinese reform and opening-up initiatives announced over the past 12 months.

"China represents one of the largest opportunities for many of our clients and JP Morgan. It is a critical component of our growth plans, globally and in Asia. We have strong ambitions to strengthen our position in this very important market in order to better serve our clients and the local community."

China's economic and financial market reforms, the Belt and Road Initiative, the rapid development of the new economy sectors, and RMB internationalization have all presented significant opportunities for JP Morgan and its clients, which have a long-term strategic approach to their business in the country, he said.

The firm announced that it had submitted an application to China's securities regulator, seeking to establish a new, fully-integrated securities brokerage in which it would hold a 51 percent stake, increasing to 100 percent as allowed by regulators over the next few years. The regulator provided first feedback on its application on Nov 12.

The firm's asset management business is also pursuing its plan to increase its current minority stake in joint venture China International Fund Management Co to majority, subject to agreement with its joint venture partners and the authorities concerned.

Besides, JP Morgan is looking to double its research coverage of China-listed companies across all sectors, helping educate global investors about exciting local opportunities.

Shirley Yu, senior vice-president and group general manager of Visa Greater China, said: "We believe that an open domestic market with a level playing field will not only benefit foreign investors who are operating in China but will benefit Chinese companies and consumers.

"Liberalizing the payments market would send a strong signal that China is committed to cooperation and continuing to move forward on reform and opening-up."

Yu said Visa hopes that the People's Bank of China and other agencies concerned will process all eligible domestic license applications in a timely and professional manner, according to the rules and regulations promulgated over the past few years.

"We expect that domestic market opening in the electronic payments sector will be a positive step toward further strengthening the US-China bilateral trade relationship," she said.

The global payments technology company has long-term commitment to China and is keen to make a significant contribution to the future of China's payments industry by bringing the very best of its global experience in innovation, as well as the risk and security capabilities it has built, which are essential to ensure trust and stability in the payments system, according to Yu.

"Visa recognizes the fast growth of payments technology and innovation in China, and we believe such an achievement was largely due to open collaboration and innovation across the ecosystem, both domestically and globally," she said.

Visa is expanding its partnerships and opening its global network to collaborate with Chinese fintech startups through application programming interfaces.

Experts stressed that in the long term, it is critical for China to further open its financial markets.

"As the second-largest economy today, it is a 'one way street' in terms of China's financial market opening-up," said Joe Ngai, managing partner of McKinsey China.

Ngai and his colleagues have already seen many positive developments, including the lifting of many foreign institutional investors' restrictions on investing in the Chinese mainland's markets, the inclusion and weighting of A shares in MSCI's indices, and the various stock connect and bond connect programs with Hong Kong.

There is also increasing easing of regulations on foreign ownership limits in various segments of the financial services sector, including asset management, securities, insurance and banking.

"Through facilitating more foreign participation in the financial system and creating a level playing field for foreign financial institutions, China's capital markets will develop faster and healthier," he said.

In the past, this lack of go-global strategy insulated the Chinese economy from global volatility. However, currency imbalances caused partly by the accumulated trade surplus, and continuous injections of liquidity in the domestic financial system while maintaining a not yet fully liberalized capital account have led to asset bubbles in real estate and stock market volatility, said Ngai.

"Moving more boldly ahead to integrate China's financial system with global markets would reduce the risk of excess domestic liquidity and relax the constraint of the so-called 'impossible trinity'－that is, simultaneously seeking to control monetary policy, exchange rates, and capital movement," he said.

"This would also have the benefit of developing a more global set of options for China's savers, including investment in OECD (or the Organization for Economic Cooperation and Development) economies that are suffering from a savings gap. Domestic savers in China today continue to face a lack of investment options. Historically, Chinese households have tended to have lower rates of return on their financial investments than do their global counterparts."