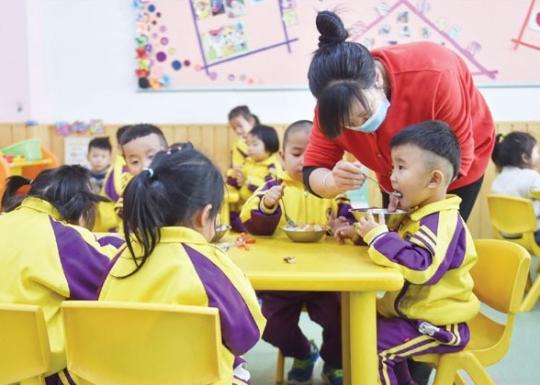 A teacher feeds a boy at a kindergarten in Shishi, Fujian Province. (Photo/Xinhua)

China's top court on Wednesday vowed "zero tolerance" and tough punishments, including the death penalty, for those who hurt children.

The comments follow the execution of two child killers and two serial rapists.

"We've given, and will continue to give, heavier punishments to those who harm juveniles, especially those who make use positions of trust, such as teachers, or who target students to get revenge on society," an official of the No 1 Criminal Division at the Supreme People's Court said in a written statement provided by the court.

"We'll also uphold the death penalty if an offense is extremely serious," the official, whose name was not given.

The top court identified the four executed men as Chen Yuzhang, Pan Yonggui, Xu Chuanyun and Yang Shengsong. The executions were carried out after their sentences were reviewed and approved by the SPC.

Yang, who was from Guizhou province, killed two children by hitting them in the head with a brick in 2016. Xu, from Sichuan Province, raped and killed a 10-year-old girl in 2015, according to a statement from the top court. Each was sentenced to death by a local court for intentional homicide.

In the other two cases, both offenders were sentenced to death by lower-level courts for rape. Chen was a teacher at a primary school in Nanjian township, Yunnan province, and raped 14 girls between September 2012 and September 2015. All but one of the victims was under the age of 14, and six were raped dozens of times, the statement said.

Pan, a resident of Mile, Yunnan, was part of a gang responsible for raping 19 women, including 18 minors, in Mile and Mengzi from March to June 2014. Pan himself raped 12 women, with one victim who was injured after jumping from a building, it added.

"The four offenses were extremely serious," the official said. "For example, Chen committed the rapes when he was the victims' teacher, and Xu killed the girl after raping her."

"Children and teenagers represent our future and must be given the best protection," he said. "We will strictly hand down harsher penalties in line with laws to those who harm children."

He called on people from all walks of life to fight such crimes and safeguard juveniles, and suggested that students should enhance their awareness of self-protection.

Since 2007, all death sentences must be reviewed and approved by the country's top court, with the aim of protecting human rights by prudently applying such an extreme punishment.

"But for those who kill innocent children or use cruel means to harm youngsters, the death penalty must be upheld," the official said.