Suppliers working hard to stay ahead of outbreak(1/6) 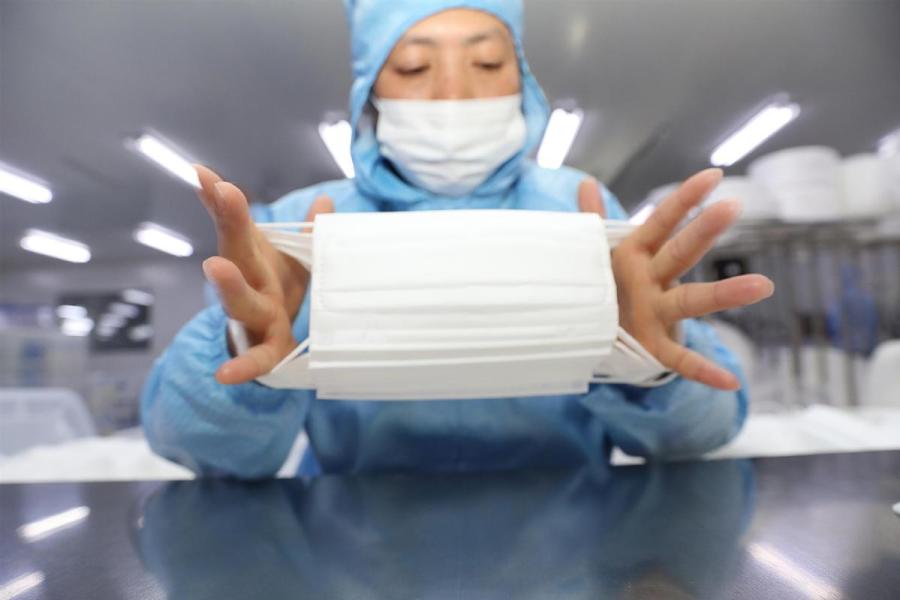 Wu Shengrong's medical supply factory has been in operation for more than two decades. It's routine for the Shanghai company to halt business during the Chinese New Year, or Spring Festival, holiday. This year, however, the routine was broken.

With most of his 163 workers not having yet returned to Shanghai from their family reunions, Wu decided to mobilize all available employees, including cleaners and cooks, to resume mask production on Jan 21, three days before the start of Spring Festival, as he anticipated the grim situation when the novel coronavirus first broke out.

Since then, the company has been in production nonstop, even on Chinese New Year's Eve－which features the most important meal of the year in the country.

As the virus continues to spread across the country, news is circulating that some hospitals on the front lines fighting the contagion have nearly run out of surgical masks. Wu's factory is just one example of China's medical product suppliers that have been making all-out efforts to produce urgently needed items.

As of Saturday, the virus had claimed more than 300 lives in China, the National Health Commission said.

In addition to the difficulty of keeping workers from attending family reunions, medical supply professionals are also confronted with challenges in procuring raw materials because of the suspension of some production and a stressed logistics system due to the holiday break.

Novel coronavirus was an unfamiliar word to Wu before the day he made the decision to resume production ahead of schedule. "I was restless in my office and eager to do something about it," recalled Wu, who runs Shanghai Dasheng Health Products. 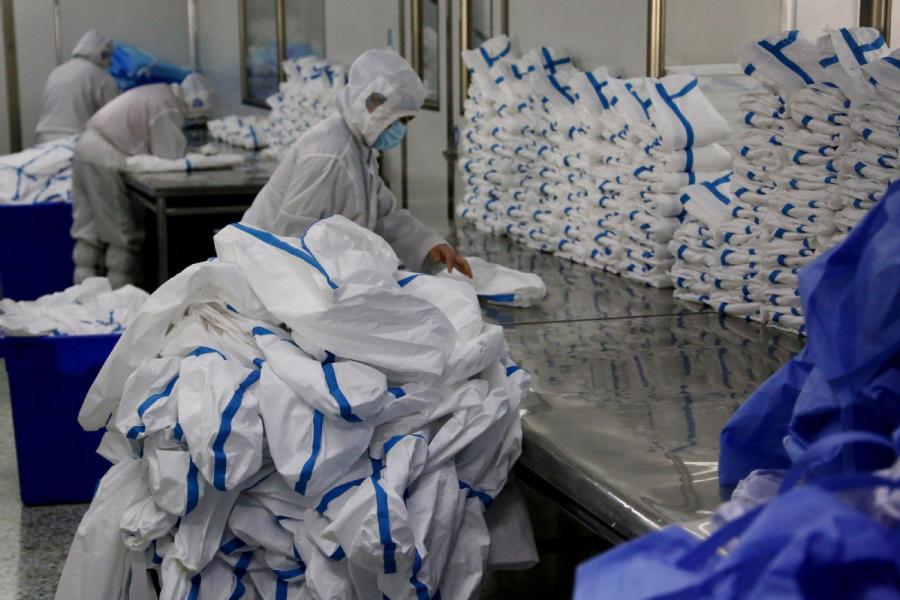 His idea soon won support from his wife and they decided to restart the assembly lines immediately.

"I called up all the staff members still in Shanghai. All the management team, cleaners and even the woman who cooks in the canteen－altogether about 10 of us joined in the work on the assembly line making masks," he said.

Wu and his staff worked around the clock for two days straight before the head of Songjiang district came for a visit and asked the company to produce protective gear for medical staff and the general public.

"We accepted the order with confidence, and had our products delivered to the market on that day," he said.

By Friday, when a group of journalists from home and abroad visited the company, Shanghai Dasheng had been manufacturing nonstop for 11 days.

"Usually after the Spring Festival, we would be making prompt international deliveries to our clients," Wu said. "However, now that we have this crisis at home, I had my daughter contact our international clients one after another, asking to delay delivering their ordered goods so that we can focus on the urgent demand at home." 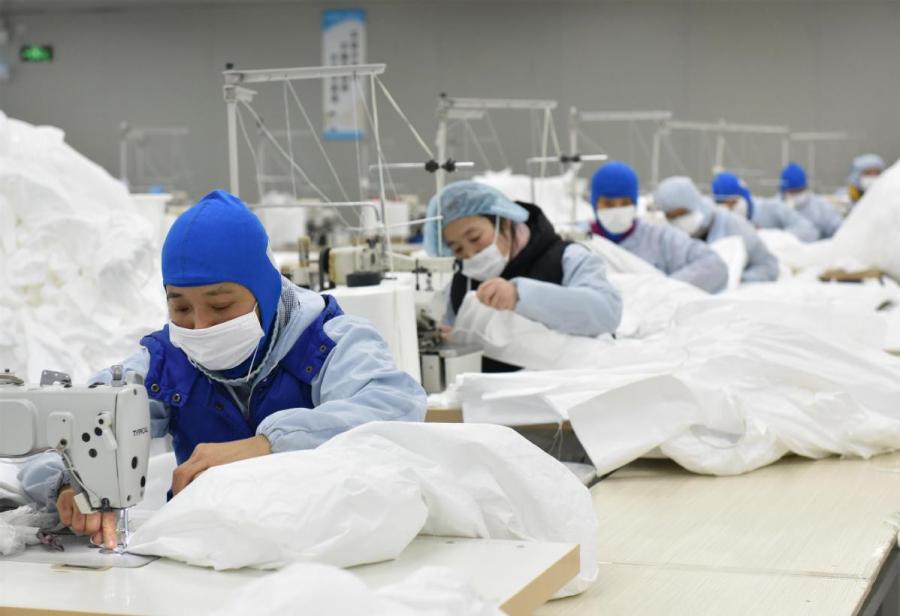 The clients, many of whom are long-term partners and good friends of Dasheng, all agreed with the request for delayed delivery, "and we finally could catch our breath", Wu said.

Dasheng is now focused on the production of three types of surgical masks for both clinical and daily use. Aside from maintaining strict quality control, Wu also decided to add three more automated assembly lines and recruit about two dozen new workers.

"All our 163 workers but one, who is from Hubei province, will come back within a few days," he said. "We have no difficulty recruiting and training new workers, no problem with shipping and the raw material supply is normal and stable. We will not raise the price of the products," Wu said.

"I am not a learned man, but as a Communist Party member and army veteran, I am a patriot and Dasheng is just a drop of water in China's ocean of private enterprises."

Dasheng was one of the first surgical mask makers to have resumed production during the Spring Festival holiday. Another 16 companies in the metropolis also soon joined in the campaign to help relieve the shortage of medical supplies.

According to Liu Ping, head of the healthcare and manufacturing sectors at the Shanghai Municipal Commission of Economy and Informatization, the city produced more than 400,000 masks every day before the Chinese New Year, and, by Jan 27, daily output had increased to 800,000. 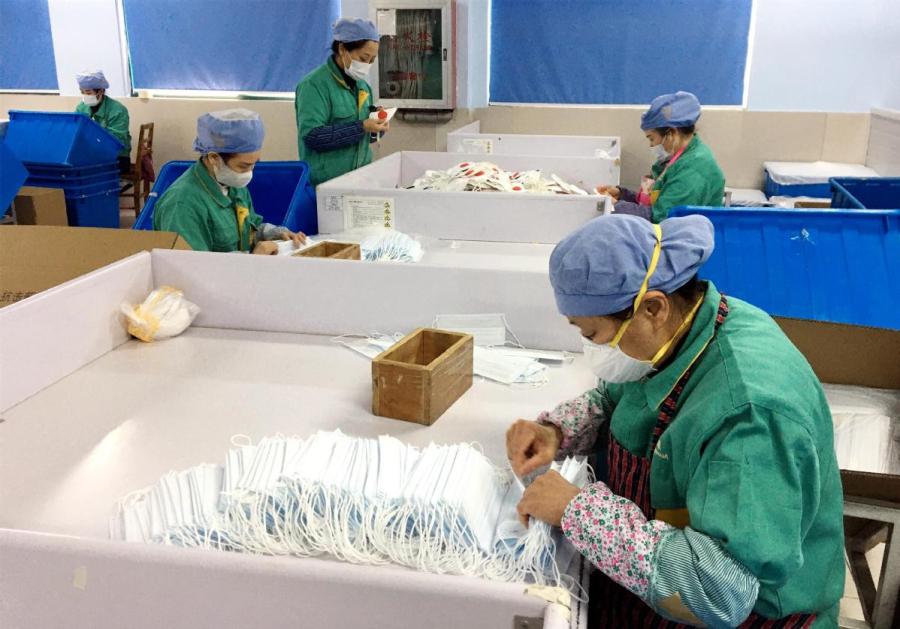 "Today, more than 1.4 million masks will be manufactured in Shanghai," he said on Thursday.

"As many more workers gradually come back to Shanghai, production will increase further. The municipality is also importing masks to increase supply," Liu said.

"In the coming weeks we will not only be able to satisfy market demand for clinical use in healthcare sectors and people's everyday use in Shanghai, but also provide assistance to other parts of the country," Li Jia, a spokesman with the commission, said on Friday.

While promoting medical supply companies to resume and even enlarge their production capacity, the country will also increase imports to meet demand, said the Ministry of Industry and Information Technology.

The ministry will also make efforts to ensure supplies to the worst-hit regions by directly distributing masks from major manufacturers.

"As the country's mask-production output gradually returns to full capacity, the stressed mask supply situation will see relief," it said.

Employees at a factory in Taizhou, Jiangsu province, work around the clock to produce masks to replenish supplies in the fight against the novel coronavirus. TANG DEHONG/FOR CHINA DAILY

Many medical supply companies in Hubei province, the epicenter of the novel coronavirus outbreak, have been running at full capacity all through the Spring Festival Holiday.

The frenzy of activity at these factories is in stark contrast to the eerily quiet streets of Wuhan, the provincial capital, which has a population of over 11 million.

To ensure local medical supply manufacturers resume full production, members of a team dispatched by the central government to guide novel coronavirus control work in Hubei and officials from relevant departments of the provincial government have visited many of the manufacturers to learn about their challenges and help address them.

When China Daily visited Wuhan Zonsen Medical Products on Tuesday, about half the company's more than 20 workers were at work making surgical masks.

"I have had no rest since the beginning of the holiday and worked even on Spring Festival Eve," said one worker.

Zhang Wenjing, who heads the company's supply center, said the factory extended its production time from 10 hours a day to 18 hours to make up for the shortage in manpower. Staff now work two shifts from 6 am to 12 am.

Despite the efforts, the plant can only make 100,000 masks a day, though it boasts a daily capacity of over 400,000. This is due to the current shortage of raw materials.

Dong Yan, assistant to the chairman of Zonsen Group, mother company of the mask maker, said these challenges have been addressed thanks to government help.

"What we lack now is only the raw materials for ear loops. But the government has been coordinating to help us get them," Dong said.

All public transportation systems in Wuhan have been shut down since Jan 23 and private vehicles without official authorization have also been banned in the city's downtown areas since Jan 26 to reduce population mobility and curb the spread of the virus.

Dong said the local government has authorized the company's vehicles to carry its workers back from their hometowns in Anhui and Jiangxi provinces as well as elsewhere.

The factory's daily mask output is expected to go beyond 200,000 soon, she added. 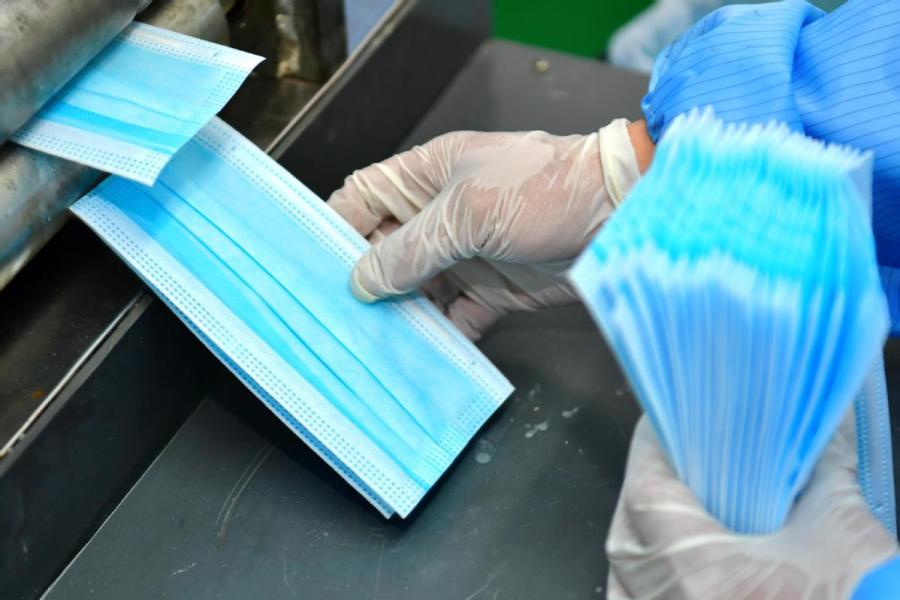 Workers at a factory in Gaoping, Shanxi province, are busy making masks on Saturday. CAO YANG/XINHUA

More than one fifth of the over 500 workers of Crown Name Disposable Hygiene Products, another subsidiary of Zonsen Group, had returned to work when China Daily visited its factory with the team dispatched by the central government on Tuesday.

In addition to a lack of manpower, the company is facing other challenges in realizing its full capacity of 10,000 protective gowns daily.

"It's a must to disinfect medical protective clothing. No matter how many we produce, they cannot be delivered if the products are not disinfected," said Li Sen, chairman of Zonsen Group.

Meanwhile, the company finds it difficult to raise the money needed to produce the number of protective gowns required daily by the local government.

Li, however, was greatly relieved when members of the team sent by the central government visited him.

After hearing that Li's company has planned to buy assets from Beijing and Shanghai to build its own disinfection facility but still needed approval from relevant government departments for construction, Sun Zhicheng, deputy head of the team, dismissed his concern that the procedure will be time consuming.

"I can promise you now that the factory's production will not be affected because of any government procedure," said Sun, also deputy director general of the National Development and Reform Commission's social development department.

He also promised Li to address his company's financial difficulties, saying: "Add me as a friend on WeChat (an instant messaging app). I will address the problem."

Li said his company is now making every effort to increase its daily output of medical protective clothing from 2,000 pieces to 10,000, and is expected to produce 1.5 million pieces by the end of April.

"I come to help address your challenges. No matter what challenges you have, you can tell me directly," Sun told multiple companies he visited.