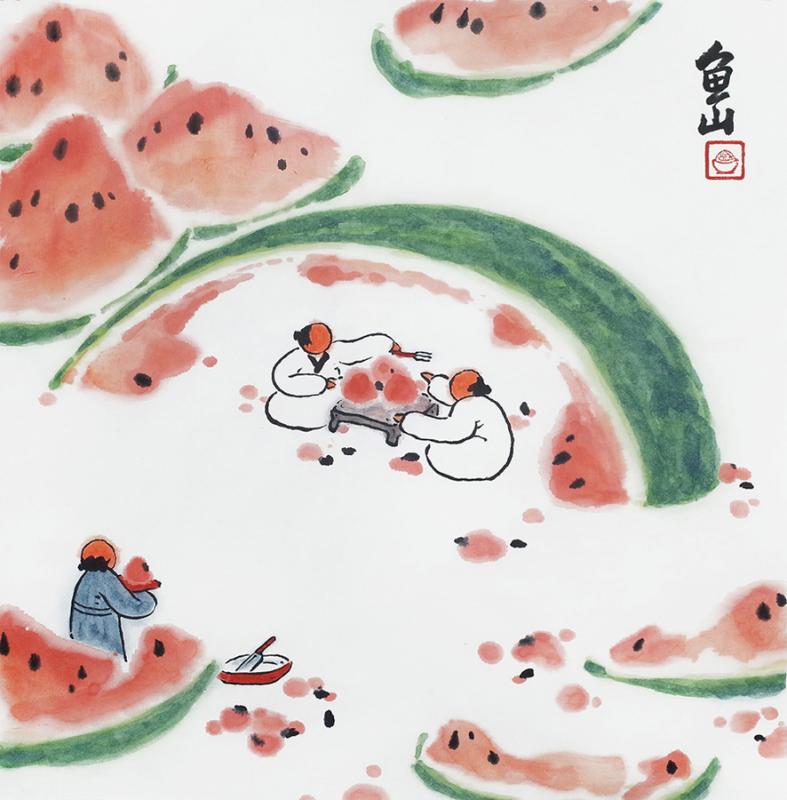 Zeng Renzhen's paintings focus on the carefree life of a tiny character who enjoys roaming through exquisitely detailed, imaginary gardens.

A tiny person in a traditional white Chinese gown wanders about in the vast world, drinking tea in an exquisite little courtyard, occasionally dozing off on a fluffy paint brush, and most recently, roaming through a kingdom constructed out of Chinese characters.

For five years, Zeng Renzhen has been creating a series of paintings centered around this diminutive character who likes to go on adventures, meet new people, take care of chores, and generally enjoy an enviably carefree life.

Zeng now leads a similarly tranquil life in the Songzhuang Art Zone in suburban Beijing, living and working in his studio adorned with paintings and the paraphernalia of a literati. He leaves the terrace door open on a sunny summer afternoon, where occasional breezes waft in the subtle fragrances from nature outside. 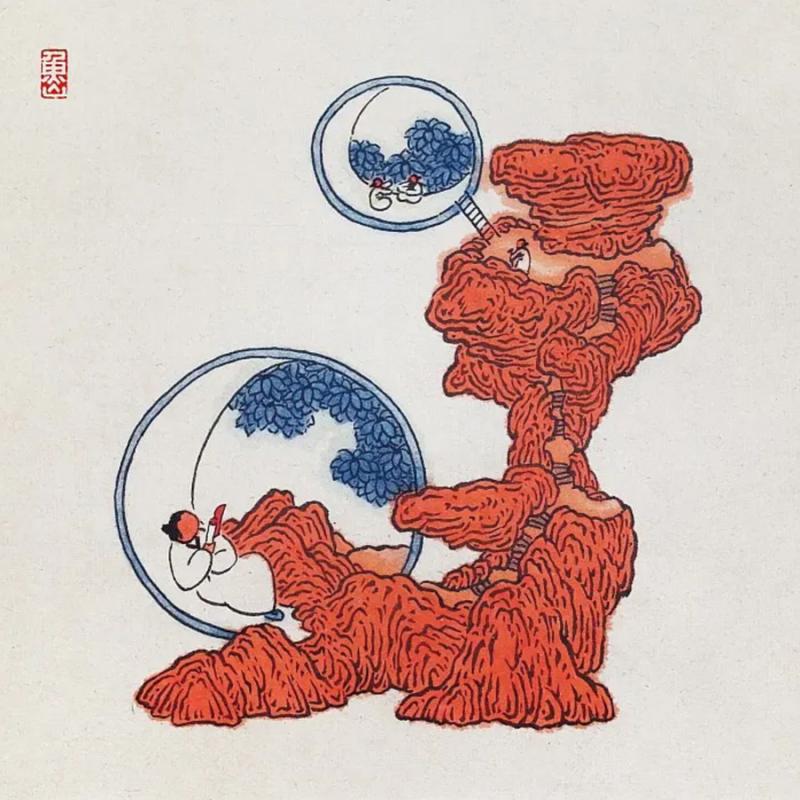 Despite having six books of his paintings published, he regards himself first and foremost as an architect. These past years of painting have been his own way of researching the relationship between people and space.

"I have a clear goal in my painting, which is to ponder the relationship between humans and nature, between human activities and space... and to address the professional topics of architectural design that I am interested in," Zeng says.

Born in 1982, Zeng grew up in the small city of Yongzhou, Hunan province. Possessing a delicate constitution as a child, Zeng spent much of his youth sitting quietly on his own, drawing and reading.

In middle school art class, he found himself captivated by the works of Fan Kuan, a Chinese painter from the Song Dynasty (960-1279), whose landscape paintings introduced to him a previously hidden view of nature.

He then immersed himself in landscape painting, which led him to become increasingly passionate about the art form toward the end of high school.

Without having received any formal training, he chose to study architecture, a discipline that requires basic drawing skills, at Chang'an University in Shaanxi province's capital Xi'an. 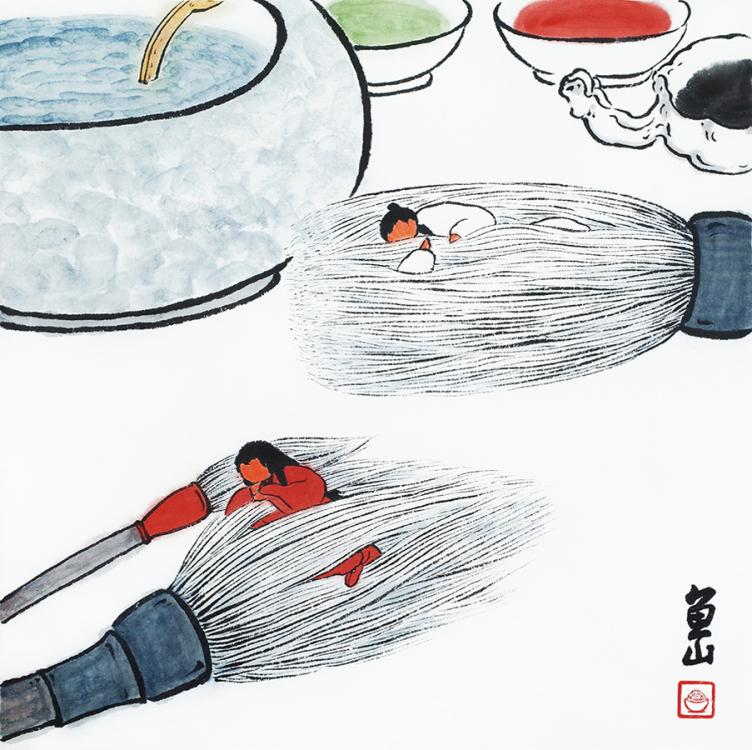 In this historical city, he spent four years researching the old residential areas and studying the living conditions in the local communities, fostering a respect for tradition and a consideration for human wellbeing.

Having graduated in 2007, he worked at an architectural firm for seven years, during which time he attended an architecture course at Peking University and discovered a vocation that connected his love for landscape with his architecture expertise-classical garden design, a discipline which he says embodies the ultimate consideration for the human living environment.

In 2014, he resigned from his job to go on a two-month field study to Jiangnan, a region south of the Yangtze River that is home to China's most renowned classical gardens.

"When you stay for two months, moving from one classical garden to another, you feel like you're living in the gardens and develop a close connection with them," Zeng says. "For instance, the Canglang Pavilion in Suzhou was specially built in an open area, and listening to the breeze floating across the lake there will offer you an immediate sense of comfort and relief." 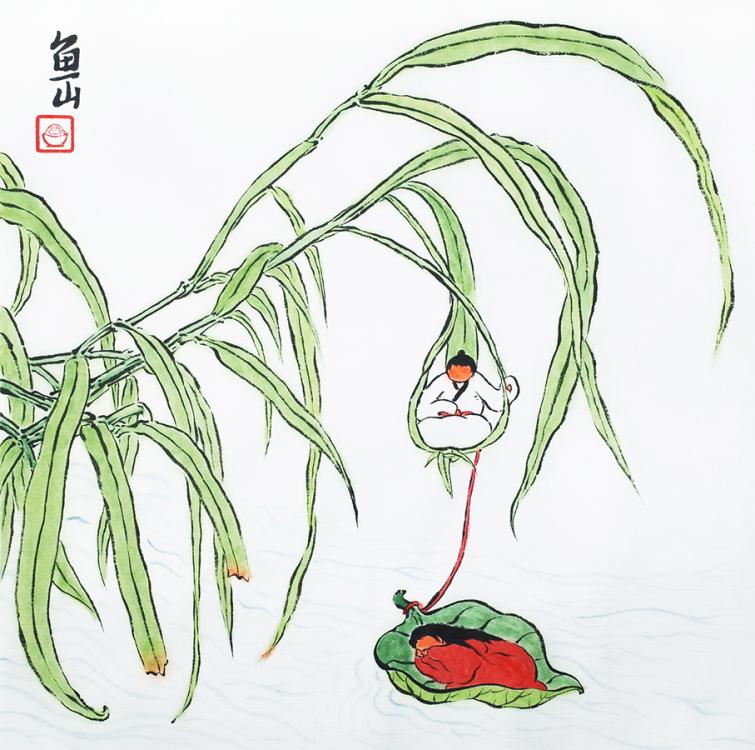 Despite his growing obsession, he decided to return to Beijing for fear of, in his own words, "doting on" classical Chinese gardens to such an extent that he would be unable to see the broader picture.

He then founded his studio, Huanyuan ("Garden of Fantasies"), which is also the name of his first series of paintings. He believes that Chinese gardens, with their rockeries and flower beds, are intended to be miniature versions of natural landscapes, so he decided to set down these miniature gardens on paper, and in the process create his own garden of fantasies.

Within the garden, the tiny person dressed in white emerged, free and unfettered, in a state upheld by Taoist philosophy.

"He is like a human spirit. He can travel freely in the vast world and its myriad entities. He represents the traditional Chinese ideal to set free one's mind in nature, without any physical or mental restrictions," Zeng says.

Initially, the tiny person traveled from one garden to another, illustrated with great delicacy and in great detail. Later on, he found his special someone, a tiny woman wearing a red dress. 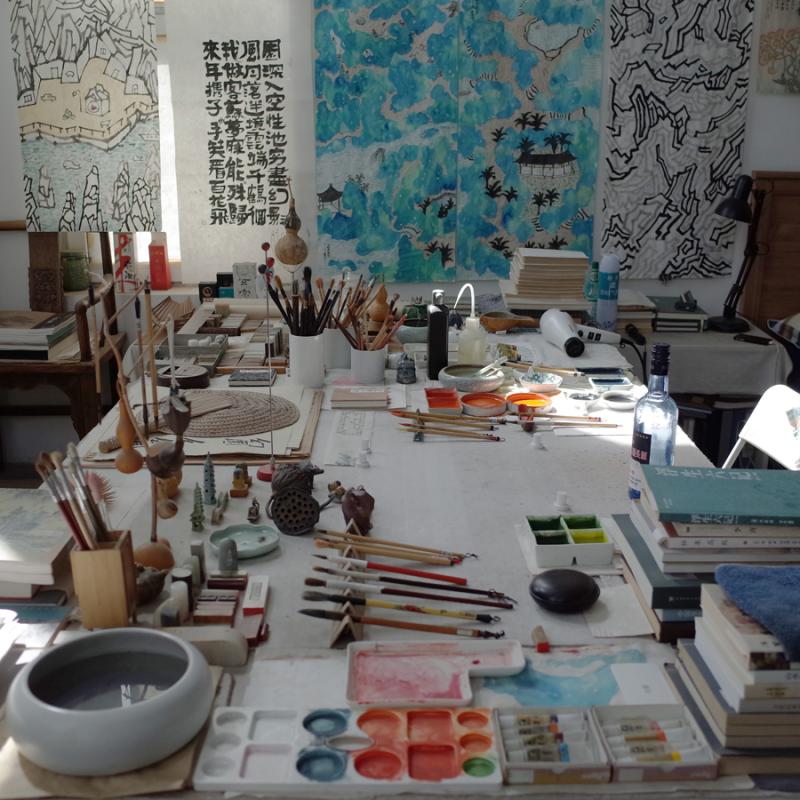 Zeng's studio in Beijing's Songzhuang Art Zone is adorned with paintings and the paraphernalia of a literati. (Photo provided to China Daily)

In one of the paintings, the woman sleeps on a sliver of a leaf floating on the water. The man sits on a plant above holding a rope tied to the leaf, preventing it from drifting away.

The two also go on an adventure, each carrying a sword that protects them from attacks by giant insects along the way.

In his latest book, Life Between Words (Zijian Fusheng), he merges language and landscape, using Chinese hieroglyph characters to form scenes from nature and everyday life.

Skimming through the paintings he posts on his social networking account, the comments generally express their amazement at his ingenious imagination and people's yearning to inhabit in the world he portrays.

However, Zeng says that the stories are not simply plucked out of thin air, but an accumulation of constant observation and reflection of natural objects.

A typical working day actually begins the night before, when he conceives the subjects of his next paintings, and calculates the amount of work required to finish them the next day. The next morning, he will immerse himself in completing the work, no matter how long it takes.

In 2015 alone, he completed over 1,000 paintings, a persistent endeavor to say the least. 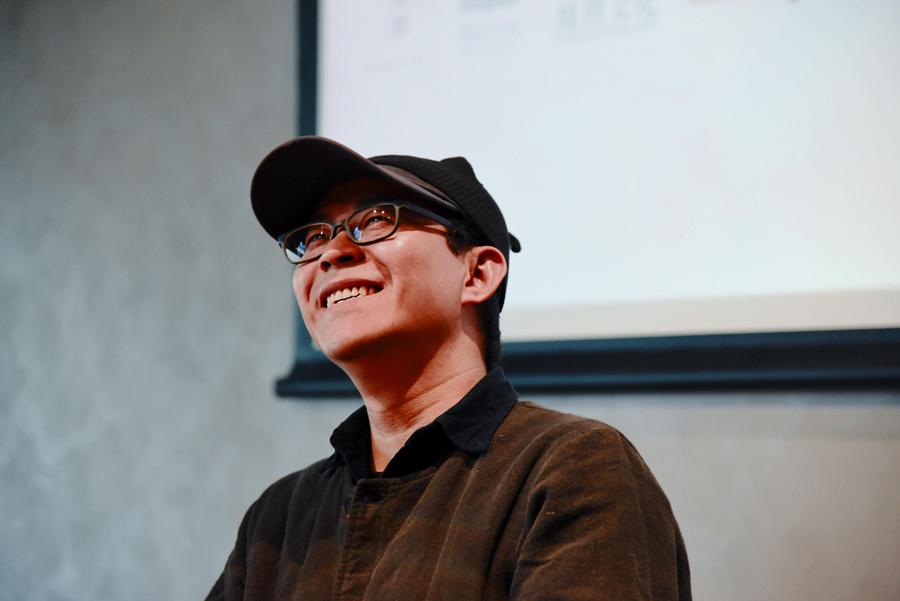 A photo of Zeng Renzhen. (Photo provided to China Daily)

His first name, Renzhen, is a homophone of the Chinese word that means "conscientious", which is the common impression he gives his friends.

"He is the same as I imagined. He is reserved, focused and self-disciplined," writer Gu Yesheng says.

Although he takes his work very seriously, Zeng also places a particular value on "fun".

"Paintings must offer inspiration, never cease to surprise and amaze, and express a hopeful vision. Otherwise they would just be a chore to do."

He says that starting from next year, he plans to spend more time on architectural design. He stresses that care for human living conditions is the focus of his work, no matter what form of architecture he chooses to convey that.

"My ideal vision would be to exhibit my own paintings in a building or garden that I have designed, so that the viewers can feel the relationship between my paintings and reality in a tangible space. After all, my imagination comes from my consideration for real-life issues and observations of nature," Zeng says.